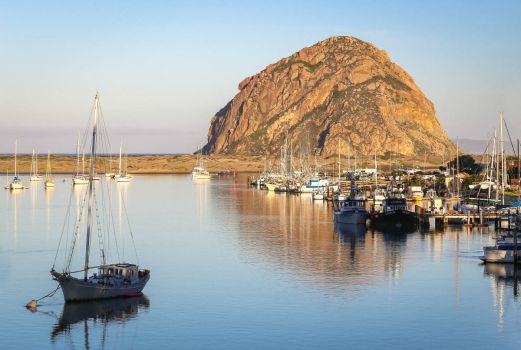 This is a view of the famous rock and the marina at Morro Bay, California.
Created by seagirl7 Published 6 September 2019
Why this advertisement?

I guess they meant coastal monoliths. There is one in Cannon Beach OR that is impressive but much smaller.

beatlecarol, at 581 feet it is quite impressive. However, there are a few larger monoliths in the states that are larger. Yosemite's El Capitan and Wyoming's Devils Tower are a couple examples. There are still plenty of Sea Otters near by. Terry

I lived there in the 80s and had a chance to visit again in 2016. I was amazed how little had changed! It is still a quaint village on the Central Coast of California, only 15 miles from San Luis Obispo where I worked at Cal Poly University.
I used to go every Sunday early morning and climb around the ocean side of the rock where you aren't allowed to go. Peaceful listening to the waves break. There is also a great sand beach and sea otters hanging out in the bay.
The ocean side of the rock was excavated in early 1900s so it doesn't look round like this side. I believe it is the largest monolith in the U.S.

This is AMAZING and, since I've never seen or heard of it before, it is a nature's wonder that it is there. Is there history about this rock? I do love this scene with that huge rock, the ocean bay and the boats everywhere. WOW!! Great photo, Terry. FUN puzzle too. Thank you for sharing and you, Sue for posting it. Hope you are making it okay with Terry being gone for two weeks. :-)

Can't resist a great photo of my favorite place! thanks!