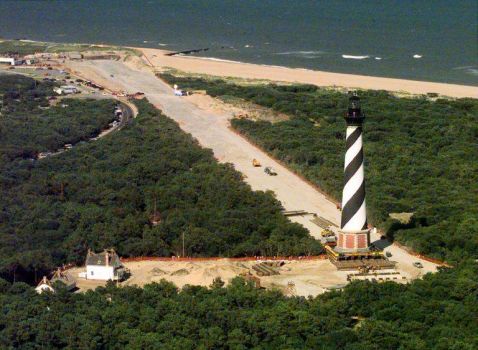 Hi, Anny. Yes, a marvelous feat of engineering. It is very interesting to read about it.

What a big job, Moving a Lighthouse x

Hi Daisy, I would love to see it - old or new location. It was in our Science book with a few paragraphs dealing with erosion and Earth Science. That's where I learned about it. It fascinated me.

Thanks, Sue. Did you notice I posted it in its original location this week?

went there about about 19 years ago

In 1999, with the sea encroaching, the Cape Hatteras lighthouse had to be moved from its original location at the edge of the ocean to safer ground. Due to erosion of the shore, the lighthouse was just 15 feet from the water's edge and was in imminent danger. The move was a total distance of 2,900 feet to the southwest, placing the lighthouse 1,500 feet from the current shoreline. All other support buildings at the site were also moved at the same time. All support buildings were placed back in positions that maintained their original compass orientations and distance/height relationship to the lighthouse. International Chimney Corp. of Buffalo, New York was awarded the contract to move the lighthouse, assisted by, among other contractors, Expert House Movers. The move was controversial at the time with speculation that the structure would not survive the move, resulting in lawsuits that were later dismissed. Despite some opposition, work progressed and the move was completed on September 14, 1999.

The Cape Hatteras Light House Station Relocation Project became known as "The Move of the Millennium." General contractor International Chimney and Expert House Movers won the 40th Annual Outstanding Civil Engineering Achievement Award from the American Society of Civil Engineers in 1999. The Cape Hatteras Lighthouse is one of the tallest masonry structures ever moved (200 feet tall and weighing 5,000 tons).