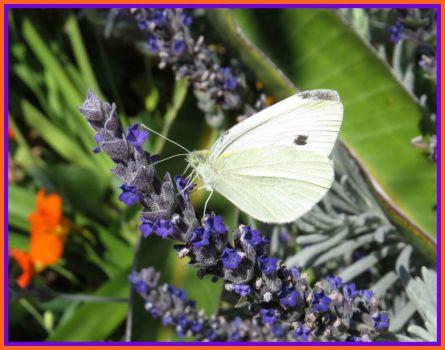 LOL!! Probably only where the next flower to visit is snooker :))) Thanks!!

His little fuzzy head hasn't a care in the world in it. :)

It's a male, as it only has one spot. Females have two.

Thanks Barb - I'm lucky they don't like anything I grow:))

Thanks Dave - this one was sure doing its share of flitting about!!!

We don't get very many either fodus - thanks for commenting!!

This is just about the only butterfly that we have.

Nice chase and excellent photo Robyn! They are good pollinators at this stage of their life. The legs and antennae really stand out here!!

Pretty but destructive if you grow cabbage and related veggies...beautiful photo, Rob :)

Thanks Ginger - I hope they left some for you!!

Thanks Griosal - it took a bit of a chase though:))

Thanks Janet - I guess they play a part in Mother Nature's plan:)))

Thanks Beekay - I don't grow any veggies - so I don't have the problem either:)))

We don't get many here either chookie - and they're always fast movers - so I ran after this one:))) I guess Spring has sprung in Adelaide too!! Thanks!!!

I've been watching literally dozens of these little fellows flying around the lavender plants this morning, rob, it sure is nice to see them back as we don't see many butterflies these days - you certainly have to watch them on your cabbages though!

Agree with you Griosal...photography at its best. Rob! Tfs.

As I've said before, these are pretty little butterflies as long as they are in someone elses garden. I don't grow broccoli or cauliflower because of them. It sure does look nice against the purple lavender though. Thanks Rob☺

No I don't grow cabbages either - because of these, but they are pretty little butterflies and you got a great pic, thanks Rob. hugs, janet

Marty planted cabbage this year so we had a few of these cute little flyers too. Thanks Robryan. :O)

Thanks Lyndee - I chased him around the garden:)))

Thanks smllpkg - but they can be a pest - luckily I don't grow cabbages:)))