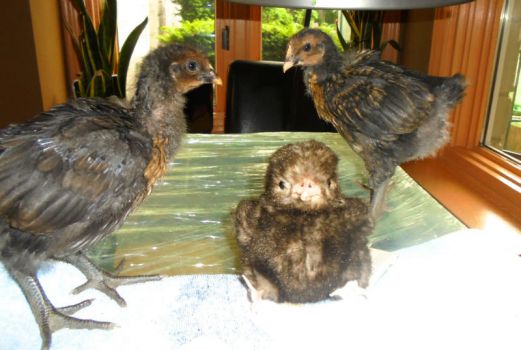 Created by 2dogs7cats Published 15 June 2015
Why this advertisement?

Other solvers gave it away...but for sure the middle chick!

Sometimes you can be so cruel, Edie.

Posted a picture for you Edie, I don't think you want this chicken: http://www.jigidi.com/created.php?id=9WG4PVFR

I hope you're not going to ask me to make him a prosthesis next Wendy. I draw the line at fixing curled toes and splayed legs. (as long as there are two of them) ☺︎

OK, Edie. I've changed my mind. I'm picking the one on the far-right because I can see that it is one-legged....and obviously propped up with an invisible wire above its body.

Thanks PJ. I hope that at least one of them will be a hen. Right now they're just over 3 weeks old. They gave it a little peck on the head but that was about all. ☺︎

Oh dear, how did the real hens react to the Kosen hen in the middle? Did they try to cuddle with it?
The hen to the right looks beautiful,
PJ

Those chicks are just over 3 weeks old Francine. These are out of my Orpington rooster but one of my old mixed breed hens is the mother. I hung onto them because I knew they were different. The other 4 who hatched with them have found a new home.

Middle one. Chicks too young to notice it, I assume. Those are big chicks.

I think it is the one on the left. Has different color around the eyes.

Thanks Ardy, Sally and Abel. I do think that the game is up for our little imposter. Ardy all four eggs hatched over the weekend and they are already sold waiting to be picked up. There was another brown one in the group. I like the name Icarus Sally. I may use it for a Sebright in the future since they are the only ones that can lay any claim to being able to fly. ☺︎

The one in the middle for the impostor? Did anything hatch over the weekend? Thanks, Edie.

To answer your question, I'm pretty sure it's the one on the left-hand side.