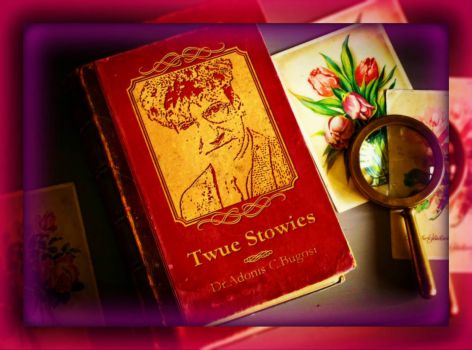 In my capacity as one of the foremost experts in the field of all things pertaining to the printed page, I am frequently, indeed often asked which books I can recommend to an earnest seeker of wisdom and truth.
Well, here is a tome which takes pride of place on my shelf of classic autobiographies. Written by the father of Dr.Adonis C.Bugosi (who happens to be my uncle), it is an enlightening bodice-ripping tale of adventure, intrigue, romance, and extraterrestrial visitations.
In the words of Dr.Adonis C.Bugosi, son of Dr.Adonis C.Bugosi - "Twue Stowies is a twuly gweat wead!".
Created by lelabugosi Published 4 October 2017
Why this advertisement?

It must be wonderful to be such an expert on every topic lelabugosi! It's no doubt a heavy burden to be perfect.

This is certainly a very interesting reading.

Sorry, now you've lost me. I don't know which subject you are talking about. Also, I have to go!

thank you- high compliment from you! l am intelligent enough to be in constant personal trouble- unemployable- but a totally different intelligence than yours.
l happen to know about the subject professionally and philosophically. l find it fascinating. l wish l could do something to support those poor kids who suffer from the stigma of being so different!
If you would care to share, l would like to know about your journey- and where your courage came from...

You do yourself a disservice......I have read many of your comments, and found them to be of a high intelligence indeedy. We simply had fun while it lasted - sadly that time has passed, our friends have been exiled, and this site has been taken over by extremists. So be it.

l gotta tell you folks- l am intelligent- but nothing like you. You are the kids i remember from Jr High who were always in the principal's office for turning the boredom into your own amusement - and NOBODY understood you. Never more than one or two per school in NYC. l am so happy for you all that you've found each other here. l cannot join you- l am not in your league-

I invite you Lela, and all my Jigidi friends to celebrate Hanne's birthday
in " miztarefet " . Please come and enjoy !!

to begin with I have a lovely romantic poem

we have not recovered yet from the wilderness months, let's make a special try guys

"In English, a distinction is usually made in pronunciation, with the singular being pronounced roughly "foh pah" and the plural "foh pahz" (with the regular /z/ plural ending sound). (In French, singular and plural are pronounced identically.)"

Religion and politics touchy subjects. I made a funny comment about "Uncle Donald" and offended some people. But that was a very long ago before the additional faux pas. (studied Spanish not French. What's the plural of many, many, many faux pas???)

What happened was that a lot of people had arguments over politics, and some of us were barred from making comments, though we could still see and solve puzzles......eventually we had our privileges restored, though one or two are still in the wilderness.

I need to know if this is true. Was lelabugosi booted off the site and you protested and got him back or is this a joke. CJ45 is the one who told me about you.

Hellooee ladies!
Well, we suffered a setback when we were all placed in exile, and still haven't quite recovered from the shock. A couple of us never returned..........

Well I have a group of friends and we banter about a lot. One of them said that I'd like you, so here I am! Hoping to meet new folks with a sense of humor. Dawn in California.

Hi newbie here. Lookin' forward to your next puzzle. Dawn

Well, I am truly shocked! Though certainly not surprised.....

overheard Churchlady having a conversation with a guy, she's really something

Be still my heart.

My darling DrACB, you know when we are in the hospital and I am under you and we are working so hard at getting everything in the best position possible.....then I am yours and only yours for ever and ever.

desmondina, I know it is hard for you to accept my serene beauty but please be aware that sometimes it becomes a cross that I must bare...I mean bear..

Ducky! You said you would wespect me, and nobody else!

Oh Fontie, you have everything that Harvey wishes he had.....including me!!

Fontie, my heart stops when I see you in that uniform but luckily I can perform CPR on myself. You are such a handsome devil and I would love to sit on the casting couch and discuss this movie with you.

If there is a part in this movie that depicts a woman who has a gentle voice and tender hands then I am requesting that I have that role. I was born to be a star of stage and screen and I am ready for my closeup!

Well, we're going with the movie first (and sequels, of course), then the mini-series, and after that the full series........not forgetting the making-of, and deleted scenes......

Well, unclebluebottle, I am pleased that you are fully (expansive wise) prepared for this engagement. Are you sure you have learned both lines? That would be an enormous job given there are no commas and the words run together. So stiff upper lip uncle, and "speak the speech"!

I am fully prepared, doublebatter. I have learned my lines (both of them) and am as fit as a bluebottle.

I'll stick with Unclebluebottle since I believe he will burst out of his suit and show a romantic side and oh how exciting that would be!!

Toes are an integral part of the story, so turning-in-toes would simply not work.

Or Johnny Depp, or Orlando Bloom, or...

Well...he could start a flutter...but it would not be the heart palpitations the Hemsworth Boys would cause....Just saying Lela B ;0)

I believe Uncle Bluebottle is penned-in for the romantic lead, since the unfortunate disappearance of Sir Wainthorpe.

It could be made into a movie, as long as there is a disclaimer that it is not representative of any one living or deceased.
If there are romantic scenes...I do hope they get Chris Hemsworth to play one of the romantic leads ...or his brother Liam ....sighhhhhhhhhh ☺♥♥♥

Bugosi, Bonga, and truth, never thought I would hear those three words together...

Or "conspiracies"...come to think of where I am...this book probably fits that genre!

Auntie Juneee ...... Master Henry has a whole collection of them, under his bed.

i like a nice juicy murder myself, keep those bodices unripped

I wouldn't worry about that. With sea levels rising, even with that planetary alignment, I doubt that it will come out of the watery depths for quite awhile.

It's certainly one of a kind - unless the other copy surfaces.......

Oooooo -- sounds intriguing: "the only autobiogwaphy which fails to wecount any pewsonal details of the authow himself" Also sounds like the *perfect* book for a movie, as it fails to inform us about any twuthful aspects of the author's life. You might have uncovered monetawy support for all your wesearch, Dr. ACB #3!

Yes, I apparently have the only copy in existence. There was rumoured to exist another copy, in the hands of the faceless monks of Lesser-Outer-Little-Bonga-In-The-Mountains-Below-Sea-Level, but this has yet to be confirmed, as the monastery is only accessible once every 74 years, when a certain alignment of planets causes the island to appear from beneath the depths of the ocean.

I'm sure of the wawaty of the book after you described it. It's probably the only copy ever pwinted.

If it hasn't already shipped I'd like to cancel my order please.

I'd like one right away pwease. I don't know how much time I have left!