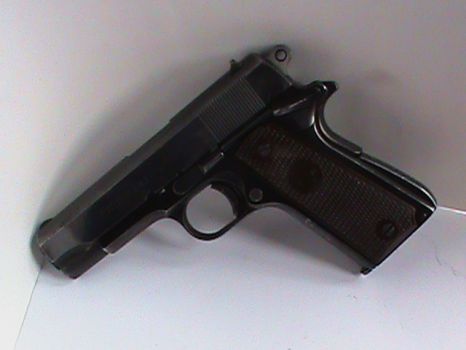 As advertised, made in 1950 and genuine Colt!
Created by OldManMontgomery Published 17 July 2017
Why this advertisement?

The Title is correct. It is Colt manufactured "Commander" model. It was released as a commercial item in 1949. It was offered in choice of either 9mm Luger (9x19mm), Super .38 or .45 ACP.

The full steel frame was released c. 1970 and officially called "Combat Commander". Popular use confused the names and the original version was called the "Lightweight Commander".

This one was built in 1951 by the serial number.

Thank you, MeD761. Even in the current era of plastic guns and wondernines, they are still popular - and effective.

Thanks for the comments. Some history involved; this 'model' has an alloy - lightweight - frame (roughly twelve ounces lighter than a standard Government Model) and is .75 inches shorter in barrel and slide only.

It was developed for U. S. Army trials in the late 1940s to replace the full sized, full weight version known as the M1911A1. The trials were cancelled and the 'old' sidearm retained in a fit of economy (just after WWII). So Colt offered the pistol as a commercial item.

I find it a marvelous personal sidearm.

Ahhhhh. I owned one of these. It was a .45 cal on a .38 frame. Very smooth, sweet to hold and never always finished what she started. I also owned a M1A with a 4X Weaver scope. Very sweet piece. .. I was drinking pretty hard so I sold both of them to a friend at the Lakewood Sheriff substation in Lakewood. Now of course I can't afford either of them. Paid $35 for the Colt and $40 for the M1A. I hand sanded and rubbed the stock of the M1A. It came out smooth as silk. I almost bought a .55 cal British anti-tank gun. Those were the days...50's, 60's, early 70's...when you could buy any gun you wanted..except full auto... and then walk down the street carrying it no questions asked.