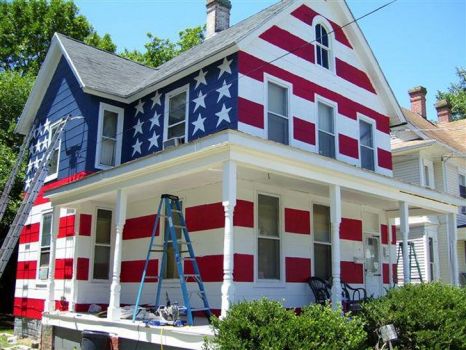 This man wanted to fly the flag in his yard and the city said no. So, he did the next best thing.
Created by fodus Published 27 August 2013

Yay for the red white and blue! Grins!☺

Good On Him. Looks great

In the City of Gaithersburg, Maryland, USA, the historic district has control over your painting, too. They can't keep you from flying a flag, but they can dictate your paint colors and how you choose to apply them (the "pattern" if you will).

Good for him, Its hard for me to believe that can happen in the U.S.A. lot's of people have died for the American flag. I have one on my porch and on a flag pole at the side of the house. When my cousin Bill shows up from Canada, I have a Canadian flag I fly from a bracket on the garage.

Your 2 year Jigidi anniversary is approaching and you've stopped posting...

Very patriotic. I wonder if it will stay. In our city somebody painted the Greek flag on his garage door and was ordered by the city to remove it.

Too bad the gentleman felt the need to thumb his nose at the historical guidelines. They are there to help keep some of the beautiful old homes and buildings true to the period in which they were built. And we are such a young country compared to so many others it shouldn't be that hard.

1canuck---love your avatar and screen name. Both are fun and informative.

Actually, the homeowner (in Cambridge, Maryland) did this in protest over restoration guidelines in a historical district when his replacement windows were not approved. He also painted another house in the same area black. It had nothing whatever to do with the right to fly the flag or the local government being "unpatriotic". It was his way of saying the rules don't apply to him. See Snopes.com for the story.

To Emerger, Of course if you do not have an excusive loyalty to the USA, you would have nothing to honor in the symbol of that country. Many have died to give us and protect the gift since the few brave signed the Declaration of Independence. We enjoy the freedoms; I enjoy the loyalty.

I had read somewhere that the man did this because he was told by the neighborhood , he could not fly the flag on his pole. so he did this and they cannot do a thing about it.....

Sorry, but that's a little too "patriotic" for me. My patriotism lies in my heart, not in stars and stripes and flags. And it isn't limited to one people or nation, but to all peace- and freedom-loving people everywhere. No disrespect intended.

Billiant! What a pity the city 'fathers' aren't quite so patriotic! I love the way the Americans fly their flag. I have an 18 foot high flagpole near my front door and I fly the Union Jack from there - I just wish more people here would fly their flag with PRIDE!!

Now that took a lot of time. Patriotic and I love it!