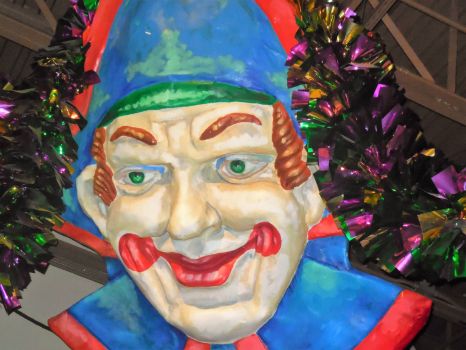 Mardi Gras decorations at our hotel!
Created by joyfulnoise4 Published 21 December 2015
Why this advertisement?

I will make you one with more pieces! Not much of a story behind it! We stayed at Port Orleans - French Quarter Disney resort last month. These decorations are hanging all over the large food court! Thought the bright colors might make a fun puzzle! I'm not much for clowns either! Hugs!

I just saw this, and don't ask me how I ended up in a puzzle published
Dec 2015, but when I saw it I thought, OH! I wish it were at least 240
pieces, then I saw who made it, and......joyful do you think I could have
one of that size made for me?? If not I will solve this one. Ordinarily I
would pass on a clown, but this one looks friendly enough, and he is so
colorful, plus there is a story behind it of which only you can share. I
have never been to New Orlean's, wish I had gone years back before
Katrina. I have two coffee table books of the houses in New Orlean's.
Thanks, and I will visit with you later. I hurriedly posted some jigsaws
today, need to get some things done around here. Sorry about your
aunt, sounds like it turned out well though.

So pretty! Love it! Glad your honorary aunt is back home. Hope you all can get some rest today. Grins!☺

Yes...I went to bed WAY too late! Thought I was going to have to head to the emergency room to be with a dear "aunt" who passed out last evening. As I was headed out the door around 10:30 pm I got another call that said she was being sent home. Guess after that I just couldn't fall asleep! So I played around on jigidi! Will probably be exhausted tonight! Hugs!

Hello dear joyful joy, so good to see you again,