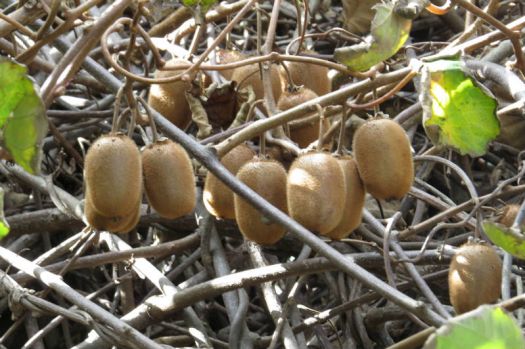 Neat, now you know that they grow there, will you maybe get yourself a tree too?

This was my first sight of them growing locally Shirley - good to hear they grow locally too!!! I never knew!! Thanks!!!

I remember the first time I saw kiwi fruit grown, it was just north of Toowoomba at Highfields, and they were growing on a trellis like they grow grapes, I love the fruit, Thanks, Rob.

Great picture Rob! I love the sunlight filtering through. The kiwi fruit are so cute!

Thanks so much Florrie :))) I feel the same way about lots of your photos :)))

Thanks Janet - I was trying to remember Chinese Gooseberries - duh!!!!

Glad it helped you Beekay :)))) Keep your eyes peeled for the yellow or golden variety - I'm sure you'll like them!! Thanks!!

These look like they could be close to ready, Robyn. They're hanging pretty heavy by the stems.

I've learned lots through the conversation here. Very interesting thanks to each of you! I'll have to look for yellow ones :-))

Hi Rob, great pic of the kiwis. They originally came from China and south east Asia, and were called Chinese Gooseberries. New Zealand growers improved them and grew them in great numbers and renamed them Kiwi Fruit. I love the yellow ones, they are sweeter. Hugs, janet

Hi chope - thanks for your interesting info! I hope you give them a go - and succeed!!! You'd need a strong trellis or pergola - if this giant of a vine was anything to go by!! In New Zealand they grow very close to the east coast & the orchards go for miles & miles! They also come in a paler variety called a Golden Kiwi that has a slightly milder flavour!! Thanks:)))

That's interesting Barb - I thought they were just a tropical or sub-tropical plant!!! Thanks:)))

There are winter hardy kiwi promoted in US but the fruit is much smaller than regular, tropical kiwi. And nobody ever says what is the difference in taste, in any. Thank you Rob for your photo and info :)))

I live in Massachusetts in the USA. It is a Zone 3 winter climate here and believe it or not, there is a species of KIWI that can be grown as a perennial here in this climate. Also a vine. I have not seen the plant, but a Permaculturist named Eric Toensmeyer speaks of it in his books. he is a proponent of edible perennial gardening. I was considering building a pergola for grapes. But these are way easier than grapes, apparently. Thought you Aussies and NZers would find that interesting. Thanks for posting. I never saw them on the vine.

It's a vine that's trained onto a trellis about 1.5 metres off the ground chookie. These vines looked like they needed thinning out a bit - and there were 1,000's of fruit in the small plot!!! It's the first time I've seen them here in OZ, but I've seen them in New Zealand once before!! Thanks chookie!