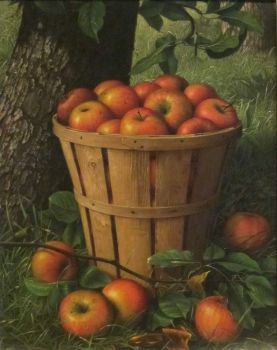 Prentice grew up on a farm in Lewis County, New York By 1872, Prentice had traveled through the Adirondack Mountains, painting the views as well as the surrounding region. He opened his first studio as a landscape painter in Syracuse, New York in 1875.

Self-taught artist Levi Wells Prentice is best known for his realistic still life compositions of fruit arranged within a landscape, or abundantly spilling from bushel baskets. Early in his career, he painted portraits and landscapes of the Adirondack Mountain region of Lewis County, New York, his birthplace.

He followed a self-prescribed educational path, begun by the Hudson River School and reinforced by John Ruskin's (1819–1900) truth-to-nature principles laid out in his book Modern Painters. Although he can be allied to both schools of thought, Prentice can not be considered a member of either. This book has a photo of the artist in his early Brooklyn studio surrounded by his paintings and a complete essay on his life and work.

Prentice married an English woman, Emma Roseloe Sparks, in Buffalo, New York in 1882 and had two children, Leigh (born March 22, 1887) and Imogene (born September 17, 1889). He moved around from 1903 to 1907 before settling in the Germantown district of Philadelphia. However, his work did not gain much recognition with historians until the 1970s. He was a member of the Brooklyn Art Association and frequently exhibited his paintings there.

In addition to his artistic talents, he was a craftsman who enjoyed making his own brushes, palettes and frames.

In his painting, Prentice placed an emphasis on dark outlining with a concern for textual precision, creating dramatic contrasts. The shift between dark background areas and the vibrant hues of the fruit are done to give the compositions an exciting, visual energy. The fruit is presented with clarity and precision. An emphasis appears to be placed on the idea of man versus nature. The wooden baskets with hand-wrought nails represent a structured, man-made object, while the overly ripe fruit represents the fleeting qualities of nature. These paintings also demonstrate Prentice's remarkable skills at rendering color, form, and texture.

Art historian William H. Gerdts observed that there are several works by Prentice in which he achieves a quality of illusionism which is unsurpassed. In 1993, the skillful "illusionism" of Levi Wells Prentice was celebrated in a retrospective exhibition at the Adirondack Museum in New York. His works continue to be appreciated by modern collectors. He is represented in many museums including the New York State Museum, Museum of Fine Arts, Boston, Montclair Art Museum, Philbrook Museum of Art, and Yale University Art Gallery.

lorimc, you are most welcome. I have a few more of his stashed away. Stay tuned. Haney :-)

Cyndi, I don't know how I missed this earlier. Too bad about the Festival. We are still able to shop at our little fresh air market in Deep Gap. We love Honey Crisp. We still have about 20 yummy peaches in our fridge...last of the season probably. Haney :-)

I live in the tri-county area of The North Country, which includes Lewis County, NY and have never heard of this artist. Thanks for the info.

Lovely painting of some apples. Funny you posted this. I just came back from one of our orchards here in town and bought a 1/2 peck of Honey Crisp apples, my favorites. Our big Apple Festival that is held the first weekend in Sept. has been cancelled so hundreds of people are going to have to go to the orchard to get the apples or do without. Hope you and Paula have a good Sunday. More t-storms later today.

Donna, we both are on the Leaderboard! WOW! Haney :-)

BEAUTIFUL painting. Those apples AND the basket look REAL. Amazing! Loved solving the puzzle and thank you for the information above also. THANK YOU for posting this beauty today.