Hark! Is That Jignut & Wicca? 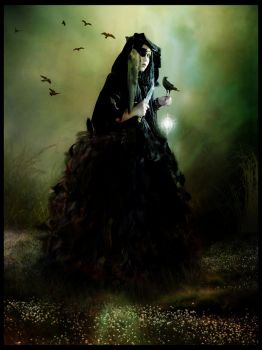 Created by texasstar7 Published 18 October 2012
Why this advertisement?

Well then it demonstrates the worthiness of digital art, something that is still in doubt. This was done by an excellent artist, not just a picture assembler.

Thanks for the info sevenstar. And thanks also for posting some fine, beautiful pictures lately!

Thanks, pkin! Patsquire, thanks for stopping in. I thought it was lovely as well. It was digitally created, and was on the Deviantart website. It just screamed our Dancing Pecan and Wicca!

It surprises the heck out of me, but this is actually good art!

I was just going to make some smart remark, but after I solved and expanded, I'm very impressed. Anybody know who the artist is?

P.S. Whoever thinks that crow or raven or whatever it is, is tame and benign, think again. It's got the hunt in its eye! And it's not a catch-and-release kind of bird. I wouldn't test the limits of the lady's patience either while she's got that knife in her hand.

Why, thanks, Wicca, for clearing that up. I knew in my heart of hearts that Dancing Pecan would never harm a flea (unless it was on you or Pookie)! CM and Mamahen, can't vouch for the type of feathers they are, maybe boa? Healer, don't worry, she's tame, and so is the crow!

Yah, I agree with mamahen.

They better not be dyed chicken feathers!

That was us last Halloween! Oh,and BTW those are fake feathers on her dress. No ravens or crows were harmed in the making.

You got it, Chookies. I think it took a few to make that dress, but it is gorgeous. Thanks for stopping by, and CM, you too.

Her dress is beautiful!!! - looks as if there's a few ravens missing their feathers!!

Thank you, Cel and Nana. The patch is a disguise, lest Glinda the good witch tries to put a spell on her!

Wicked and Cool!
thanks Texas

I'm with you, Chickie! Looks like she's already lost one eye...probably was running with that knife!!

Well, remember the Johnny Cash song, "She walks these hills in a long black veil..." Might be someone else.
Thanks, CM, I agree, I hope so too.

Hope she's just going to do peel an apple with that knife.