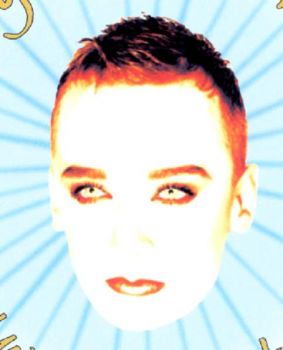 Search your past..
Please Hold off Naming him/her till midnight
Created by iceng Published 1 May 2021
Why this advertisement?

Are y'all still arguing about this .It's been 27 days already.Let's move on,pleaaaaaase.Thank you muchly.

Actually it could be the politician down the street :) don't look like Boy George, Annie L or anybody in living memory that I've ever heard of :) and thats my last two cents on the subject.

Didn't we settle this a couple of weeks ago?

Well I I must say that's the worst photo of Annie Lennox I've eve seen :'(

guys! no debate! it is Boy George! This puzzle is the picture on his album "At Worst... The Best of Boy George and Culture Club"! Google it.

In my opinion it's Boy George, O'Connor didn't wear makeup ... now I'm going to find out the real identity ...

i had thought Sinead O'Connor, too. but actually she is much prettier.

Heh heh yea I've heard and seen Boy George and to me he was a perfect waste of air space mind you not everyone likes Blues Music :)

@MartinFields Is this the first time you've heard of him? This was his "hook"—he was a guy made up to look like a girl. That was not an everyday occurrence 40 years ago.

Wow If Boy George looked like this :) He was a sick puppy

I'm with you HHSUberAlles.....this is definitely Boy George.

Dou, this is indeed Boy George. This picture has been played with - washed out face and colourized a bit. But the mouth, the eyes, the brows, the hairline - this is what he looked like in the late '80s. Maybe the puzzle poster, iceng, can share where he or she got the pic from.

I just watched a video of her singing Nothing Compares 2U!

I just watched a video of her singing Nothing Compares 2U!

I just watched a video of her singing Nothing Compares 2U...

Cannot be anyone else but BOY GEORGE!! Loved him when I lived in England in the 80s!

I thought it was Sinead O'Connor too.

To me the eyes are a dead giveaway!

No, I was wrong on this one.

Annie Lennox Hmm could be :)

Hmm SHE :) did a really nice version of "Whiter Shade of Pale" :)

Well Hilary you know him well enough to avoid him :-))

Good for you Bill.. Like you only knew the name and one lonely afternoon on iTunes bought it for under a dollar :-))

I know the name; that's all. Thanks, Alex.

He is an English singer, songwriter that produced
the 1980 hit song "Karma Chameleon" :-))

At one time I would have tumbled for him, but it felt a forewarning of bad Karma.

are you saying you'd tumble for him 😂 lolol

I know but it's not who the ladies think its, if I'm right.It's the mouth.

I have no idea who it is.

So far nanab, porgy, Isaly2, Jayne and winkalily2 know for the ladies :-))

Don't fret Bill, some how the women are who are recognizing this image :-))

I thought I knew, but I was wrong. The makeup should have tipped me off.

My daughter copied her 'do' in the early 70s and was the only girl in middle school with hair that short!!

I know this person. Thanks Alex.

Sure looks familiar, but I'll find out later if I'm right. Thanks iceng!