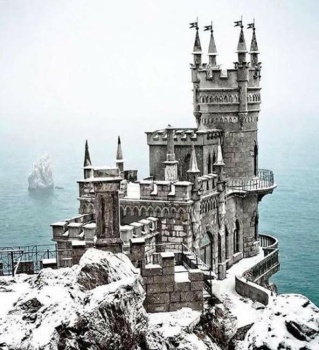 Overlooking the Cape Ai-Todor of the Black Sea in Southern Ukraine stands this amazing "ice" castle called the Swallow's Nest. This castle was built on top of a cliff (Aurora Cliff). It would be just a little scary to be in it even though it looks secure enough but if it happened to fall, it would fall hard. A wealthy oil merchant built it in 1911.

Prior to that, there was a wooden cottage there called "The Castle of Love" that was built in 1895.
Created by PutterDutt Published 20 May 2022

we were taught to respect our parents/elders and people in general when in public...parents and their kids these days have no f***ing (sorry) common sense or blame it on some disorder like ADD/ADHD/Autism or some other sh** like that

Janatom wrote:
I am very happy that everything turned out well and you are healthy and fine. And I am also very happy with all the comments of "normal" people with "normal" views on raising children. I have worked all my life as a kindergarten teacher (of which 20 as a principal) so I know quite a bit about the issue of raising children. But it's a long discussion ... but it's always true that children can't blame their behavior, they're just a mirror of their parents ... Yeah, and I have to correct my views on "American upbringing" ... :-) thank you for all the healthy opinions , take care.

I replied: Thank you for telling us about your experience with children, janatom! All of my "children" have been dogs, but I commented on the beautiful behavior of a child about 4 years old. Her mother said that she had learned how to train a dog first, then applied what she learned to bringing up her daughter. Praise when right, correct when wrong and make learning fun!

Makes me think of the famous Crosby, Stills, Nash and Young song, "Teach Your Children".

my cousin is 50, and doesn't believe me when i tell her children in my youth weren't allowed to to act worse than animals. i had 10 uncles and aunts who all had families. my cousins,and all my friends, knew enough to respect, listen to, and obey parents and other adults, especially when in public. it was common sense not to want to embarrass them, because we knew they loved us. maybe children can't sense that love, or aren't given it. today's parents, and others, only think about themselves; most can't be bothered to take time dealing with their children. so many medical excuses these days--ADHD, etc. those things hadn't been discovered, and parents learned to deal with them and acknowledge it was their responsibility to bring their children up correctly. in my opinion, when drug use became widespread (i was there) children started taking more rights (some had to), and it's just gotten worse in the last 50+yrs.
i have changed tables, or refused to sit near obnoxious children, to the point of leaving. they'll grow out of it i hear. i say, children live what they learn. Teach them how, NOW

What an amazing castle. Hopefully it is still standing now!

Amazing Castle and info thank you Ellen. I agree children should not be allowed in restaurants if they have not been taught manners and to respect other peoples spaces. Loved all the supportive comments for you, and Zelda meeting her husband ☺♥

I translated it all, Zelda.

@janatom wrote: In the Czech Republic, we call it "American upbringing" (I'm sorry ...) when children are allowed everything, because "their personality must not be suppressed" ... On the contrary, children must have limits and those parents will return over time as boomerang ... I'm sorry about what happened to you and then met at that restaurant, I understand that and I'm holding my fists too hard so that everything goes well. Heads up, lots of love and positive thoughts!
Thank you for the beautiful picture.

Bet that it is cold inside.

What a stunning puzzle. Thank you for sharing this.

well damn im sorry PD I have yelled at the parents for the rudeness of their kids when i was on break from HAB piloting it was bout my 2nd year and I was out with a lovely couple...its where I met my hubby who was actually co-manager of le restaurant and threw the family out with the kids cos the rude comments and such cos of how i yelled and used the translator person to yell for me...I signed and some people were really surprised by my sign language and the translator Harvey just yelled it the best he could with his Gay voice love him but he was so gay..he was like an older brother to me...so yea i know what its like the parents were pissed off at me and i almost got slapped by the mum of the kids but Brigham stopped her and said its not nice to hit people and thats when i fell in love with him...i asked for his number and thought i was cute and gave to me and we texted and then went on dates....he knew sign language so we conversed that way as often as we could next thing I know it a year later I married him

The whole Ukraine mess just grieves me, KC. And I agree with your take on lousy parenting! I didn't let them see me cry, but they HAD to understand my rage!

I've been saying for years that the biggest problem in America is bad parenting and this is a good example- let your darlings do whatever they want, the rest of the world be damned. I have no patience with that. The parents probably won't be amused to see what the little heathens turn into, and they'll wonder how that ever happened.

This castle is magnificent! I hope it's still standing with the evil that's happening in Ukraine.

No. The awful day when I got my breast cancer diagnosis Joe took me to a very nice restaurant. The 2 couples (and multiple untamed kids) at the next table let the rug-rats run wild, complete with crawling under people's tables and was capped off by one tackling another up against a glass door while shrieking at the top of his leather lungs. T banged both my fists on my table and yelled, "MY DOGS ARE BETTER BEHAVED IN PUBLIC!!!" I had been desperately trying to keep my tears under control, but that final attack was too much! Would you believe the 2 sets of adults glared at me and talked nasty about me? No, they had no idea the bomb that had just been dropped on me, BUT, there SHOULD be a limit!!!

More complete answer: did you complain to the manager?

Question: Should adults be allowed to bring little children to a restaurant if they cannot keep the kids from SCREAMING and running around the tables?????? We just had an almost unbearable dinner at the only restaurant Joe likes. :o(