Duck and cabbage anyone? 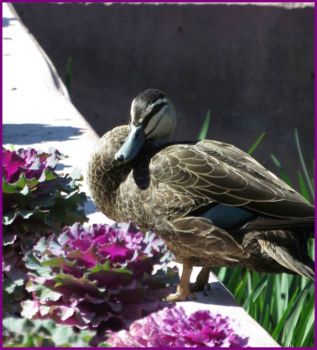 Very nice one, robryan. Roma St Parklands looks like it's a prolific provider of photo opportunities! :) I learned something from jan42ful about duck ID.

Great photo! Mallards eat cabbage I wonder if they do too...if so its a handy meal!

Sure does look like a female mallard so they must be very similar. Great cabbages. :)

Soaking up the sun.

Thanks Janet - he's sure an attractive one!!

Rob, they are very similar to Mallards, just darker and with the distinctive face markings. Hugs.

Hmm, I was wondering what to have for dinner!! It looks like he's posing for you, rob :))

LOL!! Nice story Marian:)))
Janet says that they are a native Aussie duck - Pacific Black Duck - maybe they look similar to Mallards - I'm not up on my duck ID:))) Thanks!!

A nice puzzle thanks Rob....it seems mallard ducks are just about everywhere. For many years we had a seasonal site in Canmore (just outside Banff National Park) alongside a lovely creek and for a few seasons we had a Mallard pair always show up at our trailer, so much so we named them Rodney and Rebecca....good memories.

Thanks jyl - I enjoy bordering the photos!!

She was quietly resting away from the garden visitors Shirley - thanks!!

This is a Pacific Black Duck, Rob, a native Aussie. Looks great with the ornamental cabbages. Thanks and hugs, Janet

Mother duck is very content among her pretty surrounds, the cabbages are very decorative, Thanks, Rob.

A beautiful shot of Mrs. Mallard posing for you. I love the slim purple border you used to bring out the colour in the cabbage. Thanks for sharing!