Svat (or Safed - English spelling takes various forms) is in northern Isreal near the Lebanon border - see below for history of Svat, Israel tour, Dec, 2016 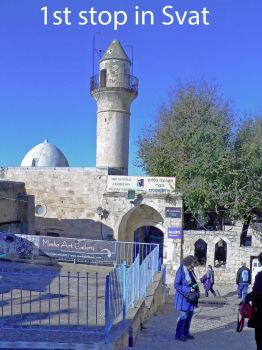 Svat is an ancient town and has always had a population with many religions. It was a sanctuary for rabbis and other intellectuals over the centuries when there were pogroms or other attacks on religious leaders. Today it is a busy cultural center - many ancient synagogues, old mosques, artist shops, as well as a center for health services. The Israeli government has built a number of hospitals near its borders - including here in Svat. The services are free for those who can not afford the service... that includes prostheses when necessary - and free upkeep of the artificial limbs - and those services at those costs are available to all - including wounded soldiers from other countries.

from: https://www.safed-home.com/safedhistory.html
History of Tzfat
According to archaeologists, Tzfat is the only location in the Land of Israel that has had almost uninterrupted Jewish presence since the time of the Maccabees. Tzfat's residents have included some of the most illustrious scholars of Jewish history and the ancient cemetery of Safed attests to its importance to the Jewish world from ancient times until today.
Earliest History of Tzfat
safed cemetery, Safed, Israel
It is unclear when the first Jews lived in Tzfat. Archaeologists have discovered a 3500-year-old implement in the wadi near Zefat as well as pottery shards that date back to that era. It is clear that there was some sort of settlement here at that time. However, documenting the first Jewish settlement is less clear.

Tzfat was mentioned in the Talmud as one of the stations where a fire was lit to announce the coming of the new Jewish month. When 2 witnesses testified at the Temple in Jerusalem that they had seen a New Moon (new month), a fire would be lit there to notify surrounding Jewish communities of the month's commencement -- this insured that Jews throughout the area would be celebrating Jewish holidays in sync. Communities along the line would light their own fires when they saw the fire in Jerusalem, and again, more communities would light their fires when they saw those of the nearby towns. The Talmud mentions Tzfat as one of those stations.

Greek coins have also been found in Safed, attesting to a community there in the pre-Roman era. Josephus wrote about stationing a battalion of Jewish soldiers in "Sepph" in the war against the Romans, and many historians believe that the area that he was speaking of was the modern town but again, there is no archaeological evidence to support that.

In the 12th and 13th centuries the city was occupied by the Crusaders who built a large fortress on the mountaintop above the city. Historians believe that the Crusaders slaughtered the Jewish and Arab populations when they arrived, but subsequently allowed the local populations to return to the city. After the Crusaders were defeated by the Beibars the Jews enjoyed a period of benign relations with the Beibars and then, with their successors, the Mamalukes. The Jewish community began to grow during this period and among the new settlers were rabbis, scholars and Kabbalists. ​

Middle Ages and the Age of the Spanish Inquisition
The Middle Ages is the era when we start to see why is Safed important to judaism. The Spanish Inquisition resulted in the expulsion of over 100,000 Jews from Spain. These Jews were dispersed throughout the world. Among the fleeing Jews were some of the greatest rabbinical and Kabbalistic scholars of the Middle Ages who decided to move to the Land of Israel. Kabbalah scholars were drawn to Tzfas because of its proximity to Mt. Meron, the burial place of Rabbi Shimon Bar Yochai. R' Bar Yochai is believed to have learned the secrets of Kabbalah while hiding near Tzfas (in Peki'in) from the Romans. It is said that God appeared to R' Bar Yochai through divine inspiration, imparting the secrets of the Kabbalah. When the Roman decree against him was lifted, R' Bar Yochai left his hiding place and began to travel through the area, teaching what he had received (To Receive is the Hebrew word "L'Kabel", which is the root of the word "Kabbalah".) Rabbi Shimon Bar Yochai is also believed by religious Jews to have been the author of the Book of Zohar, the basis of Kabbalah.

It was during the 15th and 16th centuries that Tzfas became recognized as one of the four holy cities of Israel, the "City of Kabbalah". (The others being Jerusalem as the home of the Temple, Tiberias as the city where the Mishna was compiled, and Hebron as the home of the Cave of

After the Spanish Expulsion, as Jews became more and more dispersed, the Jewish religious leadership worried that the laws and strictures of Judaism would not be remembered. To codify Jewish Law, Rabbi Yosef Caro wrote the "Code of Jewish Law" in a basement room beneath what is today the "Yosef Caro synagogue", reportedly together with an angel. Rabbi Alkebetz wrote "Lecha Dodi," the traditional psalm that is sung by Jews throughout the world during the Kabbalat Shabbat service. When Rabbi Yitzhak Luria (the ARI) came to Tzfat, he instituted the custom of beginning Shabbat with the Kabbalat Shabbat ceremony, singing Lecha Dodi and other psalms to welcome the Sabbath.

Other customs which began in Tsfat and are today part of the established Jewish World are the custom of staying awake throughout Shavouth night to study Torah (Tikkun Leil Shavouth) and the Tu B'shevat Seder ceremony. Both of these customs were derived from Jewish mysticism by the ARI.

In addition, Rabbi Ya'akov Beirav tried to reinstitute the Sanhedrin in order to reabsorb Jews who had converted to Christianity under duress during the Inquisition. He was unsuccessful in his attempt to set up a new Sanhedrin, but he was able to use the momentum that he started to impress upon the established Jewish World the obligation to reintegrate the repentant Jews back into Judaism.

Rabbi Yitzhak Luria, the ARI, was recognized during his lifetime as the greatest Kabbalah scholar of all times. This reputation stands until today. During the 3 years that he lived in Tzfat he brought new understanding and meanings into the discipline of Jewish mysticism. He created the "Luranic Kabbalah" that is mainstream kabbalah study today. This is the discipline of how Kabala can help us to better our relationship to God and our fellow man. The ARI studied Kabala in a small cave which sits on the side of the Air Sephardim synagogue (then called the Eliyahu Hanoi synagogue) and is believed to have studied with Elijah the Prophet who came to sit with him while the ARI was studying.

Throughout the 16th and 17th centuries Tzfat vied with Jerusalem for the title of "most important city". Among many mainstream rabbis there was discomfort at Jerusalem having been usurped by Tzfat. The communities of both cities competed for the privilege of having scholars who came to live in Israel settle in their communities. When the earthquake of 1759 flattened Tzfat, many rabbis declared that it was Tzfat's "punishment" for daring to "compete" with Jerusalem. Whatever the reason, the earthquake was the final stroke that ended Tzfat's standing as "Golden City", for the Jews of Tzfat were never able to recover, economically or population-wise. The greatest scholars no longer flocked to Tzfat, and troubles with local Arab and Druze villages cemented Tzfat' decline, as did the 1837 earthquake in which close to 4000 residents were killed.

The Great Earthquake to WWI
In 1777, a wave of European Jews began immigration to Tzfat. First, in 1777, the Hassidim arrived, and shortly afterward, the non-Hassidic Litvaks (Lithuanian anti-Hassidic school) began to come. Life for these people was extremely difficult -- journals of those years speak of raw sewage running down the streets, struggles to please the Turkish rulers, excessive taxation and difficulties in making a living.

In addition, the Jewish communities which lived in the town had difficulties with each other. The Sephardim, who had been the majority of the Jewish residents until then, spoke Arabic, and could not communicate with the Ashkenazim (Eastern Europeans). The Hassidim and Litvaks avoided each other. Sephardim looks down on Ashkenazim and practicing unauthentic Judaism, and vice-versa.

A devastating pogrom in 1834 was followed by a destructive earthquake in 1837. All communities were affected but the destruction was so great that, even working together, they could barely struggle to rebuild. Many Tzfat residents left during this era in which epidemics, Arab massacres and grinding poverty were the daily facts of life.

During WWI the ruling Turks feared that the Jews would support the British. Their harsh policies reduced the city to near famine. Young men fled as many were coerced into forced service in the Turkish army, and hundreds, maybe thousands, of Tzfat residents, emigrated to America, Australia, South America, and other lands, leaving the poorest and least-able to leave to struggle on in Tzfat.

British Rule
With the British rule and the Palestine Mandate of 1918, the Jews rejoiced at the end of Turkish rule, but their happiness was short-lived, as the British soon demonstrated their intention to appease the Arabs at the expense of the Jews. The British set up their headquarters in the Saraya building on the edge of Tzfat's Arab quarter, and allowed the Arabs free reign.

This was most apparent during the riots of 1929, when Arab marauders spilled over the marketplace that divided the two quarters and entered the Jewish quarter, slaughtering, pillaging, raping, and setting fire to the quarter. The Jews who were able to escape ran to the Saraya, where, even there, under British "protection", the Arabs managed to kill Jews huddled inside. The British allowed the Arabs to continue their riot for 3 days, and when the Jews returned, most of the Jewish quarter had been ransacked.

The Tzfat pogrom occured at the same time period of the Hebron pogrom, when 67 Hebron Jews were hacked to death. The Hebron Jewish community ceased to exist -- the survivors of that attack fled to Jerusalem, never to return. But the Tzfat Jews had nowhere nearby to re-establish themselves, and so they began to arm themselves and organize self-defence. This served them well in 1936, when the Arabs of the area again rioted. ​

Outgunned and outmanned, the Tzfat Jews nevertheless refused to evacuate the city when the departing British advised them to do so. The British turned over all the high points of the city to the Arabs and then, as the British Mandate ended, left the country.

Tsfat civilians huddled in their homes as the battles raged day after day, but an old Czech artillery piece, renamed the Davidka, frightened the Arab population of the city with its tremendous noise. The Arabs became convinced that the Jews had acquired the Atom Bomb after one post-Davidka blast rainfall, and they fled the city. Days before the State of Israel was proclaimed, Tzfat was liberated.

Over the following decades the city absorbed refugees from Europe and North Africa. Some of Israel's finest artists set up their galleries in the town and the Artist Quarter put Tzfat on the map as a thriving tourist center. In recent years, large numbers of English-speaking and Ethiopian immigrants have joined the community, and the city today is a bastion of multi-cultural Jewish traditions, practices, and beliefs.
Created by garrymcrane Published 13 May 2021
Why this advertisement?