Yes, as a youngster, I DID Deliver Pizza. 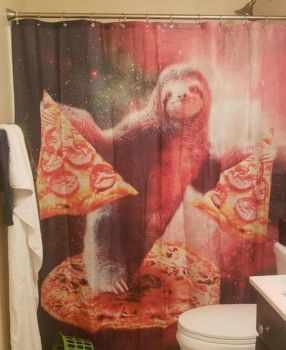 If you all had followed my puzzles, you would have remembered a pole dancing phone case I created. They were fun days, but one must grow up. I DID deliver pizzas. I was hired, and, alas, fired on the same day, but still.....

I would stomp on pineapple pizza, because it is not real. I do, however enjoy the feeling of nakedness. Which is why clothing is banned at my compound.

(The nurses uniform is allowed, but let's be honest, it is almost not there).

Great job pukas... you said it better than I ever could! :-)

Good point Ada. I doubt he delivered anything now I think of it. He might have worked for the DMV.
And they couldn’t tell he was dancing on the bar. The bouncer threw him out because they thought he was sleeping.

He is standing on a bath mat. The slices are actually wash cloths. He never delivered pizza. Lets be honest about this. Am I right folks? huh? am I ? Juba, of course, delivering anything is honorable. I also am a believer in pole dancing, belly dancing is an art, any form of entertainment is honorable. ( I do know for a fact, dancing on the counter in a bar was fun, oh so long ago!) If Hoff danced or stomped on a pizza was probably because it had pineapple on it.

Now this is ridiculous You weren’t pizza delivery boy and you didn’t do belly dancing. So cut it out. You were a nice sloth.

I did, we had some slow aging wine from the grapes I stomped (many of the grapes were able to run away before I could get them). We used to Stomp by the Irish Spring.

Or maybe Stomp with broomsticks and boots - better than Irish dance ! ╰(*´︶`*)╯

Did you go on to stomp grapes? Seem like the logical next step.

Sloths have been known to entertain, teach, comfort, and just pose for their beauty for millenia. When I make pizzas for my friends, the toppings are quite thick, sometimes requiring 2 or three people to carry the pizza. This image was taken when I was young and a bit naïve. Yes, I was a Strip -o-pizza delivery sloth. Not the greatest career path, but I learned things. I NEVER once stomped on a pizza that did not deserve it.

I don't like the way you're standing in the middle in bare paws and claws! ╰(*´︶`*)╯

Why are you stomping pizza, and why are you in the shower?
Once you've seen it,...

This could also be the rehearsal to the 'dance of 7 veils' … (or 7 pizza slides)
It's amazing how many 'funnies' there is about sloths - how come mr. Sbonne !

There was pizza back then?

Are you implying I was NOT delivering Pizzas?

I will have to talk with those guys.

Thanks, I always believed it added to the pizza flavor.

Nice use of sepia.