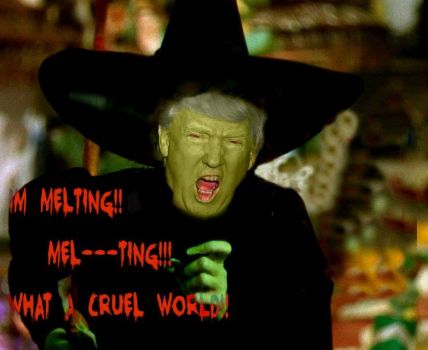 Created by gibbs1 Published 18 October 2017
Why this advertisement?

Makes no difference to me who you are replying to, be in error and critical where such is off base and erroneous and I see it, I will chime in and have my two cents worth. I also will support those who love this country. @suemarie

When criticizing is correct and on target then you will get nothing from me but approval. When it is off base you will get nothing from me but rebuttal. Try me @suemarie, be critical of something that you are so very sure he is wrong about and I will agree, go ahead. Is he a loud mouth and do I wish some times he would think before he opens his mouth, hell yes, that is the one big thing I find I do not enjoy about him. But he beats the hell out of what was in the WH preceding him by a very long shot.

@bigH, no it did not take long nor will it in the future when your hate is posted on this site by anyone.

Make any excuse you want. It is still hatred for the man and the nation over which he presides.

Yup, no doubt about it, he is the biggest racist in the country, he wants to stop "illegal immigration"and follow the laws on the books as written by Congress, unlike the socialist/racist he followed in office. He wants to stop or try to stop terrorist attacks in our country by refusing to allow people in our country who reside in countries tied to terrorism, he wants to send illegals who have committed crimes against our people and our country to prison and lock them up, he wants rid our streets of MS 13 and other gangs killing our people, he wants our citizens to honor and respect our flag and National Anthem, etc. etc. etc. Yup, all of you are spot on correct, he is a racist, no doubt about it. Yes, give each other the 'pat on the back" below for being so righteous and correct.

bigH, I was tring to find the words to respond but you did it for me. You hit the nail on the head!

More hate against the United States as designed.