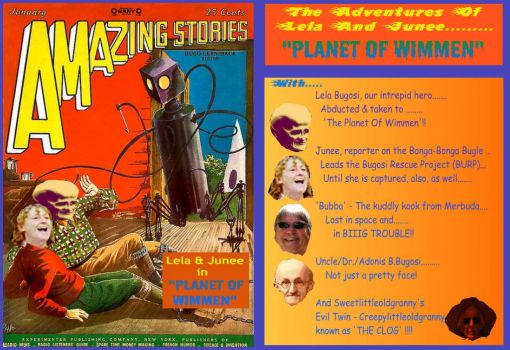 Created by lelabugosi Published 13 November 2012
Why this advertisement?

Not to worry, TC. Possums, whirling or otherwise, are entirely benign. And they will happily clean up the mess you left on the floor with all that popcorn.

Well, saucy-thingy......Loolabagoosi is actually my evil twin - P-Squirt's alter-ego would be someone (something) nice and benevolent....
double-batter......Granny will be doing the rounds with refreshments during the interval.....

Hmm..would it then logically follow (this being a story of opposites) that M'sieur PSquash has a good alter-ego in Loolabagoosi????? The mind seriously boggles.............

Yawn! Has the show started yet? Who ate my popcorn? And what's this whirling possum doing in my lap? Is this a reality movie?

The possumcopter has taken off.......

Lela, I'm running low on Jolly Time - - can you rush some to me by express possumcopter so that we can all enjoy the show with our tubs of popcorn? Better send some butter and salt, too, and tadpole grease for those who fancy it.

Whatever this is going to be I want to sit down and have some popcorn too!! It sounds as if you ought to have some more loose nails in the pocket to bite, when you have finished your own!!

Oh dear maybe they were talking about me when I punched CLOG's lights out. Maybe she is going to sue me. Good job I had plenty of sober witnesses, eh guys?

Perhaps you should start your research with the most likely suspects, Juneeee...perhaps SLOG or CLOG...perhaps???

figured it must be something like that, now my reporter's antennae is wondering what they were talking about, who has been drunk, well that could be almost anybody

Okay, so it would appear we'll have to lift the ban on copporn munching in the reading-room.......please do not throw it about....
was-shining......under The Tadpole Act 1897, minor misdemeanours, such as kidnapping a banker, or overthrowing a dictatorship (I'm trying to change that one) are thrown out of court if the accused pleads irresponsibility while under the influence (of Tadpole Wine)......

overheard a couple of lawyer types talking, one said "Ah but not under tadpole law" is there such a thing, is it to do with being drunk and irresponsible for ones crimes?

OK I have smelled the coffee now I need popcorn please

I know I haven't been around lately, but I'm looking forward to this BUGOSIPALOOZA and to following the antics of LOOLABAGOOSI!! Count me in on some popcorn, fruity-marsupial.

This should be good, I'm going to get some more popcorn with real butter and lots of salt! Me in biiig trouble? Oh no Lela, I'm getting nervous!!

Oooooooooh, I can hardly wait. I can see Juneeeee as a great BURPer. But I am a little concerned, lela. When I look at your avatar and then the cover of Amazing Stories it looks like Juneeeee has punched out your lights too, also, as well as...

New contacts??........I fail to see your meaning.....unless you are referring to my use of LARGE PRINT.......(that would be because I am peddling a SENSATIONAL TRUE SCIENCE-FICTION STORY THAT ACTUALLY HAPPENED!)..........

Maybe with some tadpole grease instead of butter, Lela? Oh, and do you perhaps need new contacts? (The kind you wear in your eyes.)

Wicca, I will make you a washtub full of popcorn. Then I'll share it with you. Or maybe I'll eat most of it myself.

Popcorn? Did someone say popcorn? I'm only going to stick around if there's popcorn.

time for me to sing our little song as I march up to bed, goodnight all

you have decided to tell the true story? you are so brave

Patience! I went to school with her. But you can keep her Lela.

You will have to have patience ladies.....tomorrow is the first issue, and the TRUE Story will run for a couple of weeks..........we mustn't rush things!...

I'll have what Junee wants too. When does the picture begin? I'm waiting and reading some comic books to pass the time. But I am beginning to get a bit antsy. Does anyone know what time it is??

I want a tadpole and tonic

I want popcorn if I am going to watch this!!

Budge up a bit, I want to see the part where I punched old Creepy's lights out. Then while the women were fluttering around trying to revive CLOG we undid the rubbish schoolgirl knots and escaped from our bonds - that's when the chairycopter arrived and dropped it's safety net. We were winched up like a haul of cod and whisked back home. Hopefully Lela will be more careful about locks and alarms in future. This reporter will go to quite a few lengths to bring you news of traumatic adventures, or at least dead donkeys which is what they seem to be getting in Britain today. So glad I am here in Bonga Bonga where the news is never manipulated.