Grizzley in the Campground! 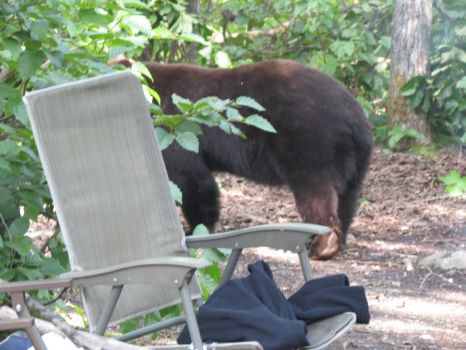 Created by texasstar7 Published 3 November 2012
Why this advertisement?

Funny, Potatomum, me too. Canoekaw, they're in Alaska, and I don't think you can choose whether they are with you or not, there's so many of them. I so enjoy the pix they send me. Thanks for stopping by.

If I were camping there, that jacket would have been mine. I would have taken off so fast I'd have run right out of it!!

I don't camp with bears. They scare me!

They said that bear kept them up all night foraging around for their food. That would have scared me to death! Why would you want to go camping in a place like that!

I see you offered him a seat to sit in. I think he want food more.

did you scare him away???

Is this what you'll pick me up in?

So texas where you from? Wanna meet up and have a dawg together?

If you ask me I think thats one nice jacket. Hawt diggity dawg aint afraid of no bear, just throw him one of your dawgs and he'll go runnin and you can grab your stuff. It's not that hard, just gotta use some common sense one in a while. Why would ya wanna let somethin that valuable go, common now y'all

Excellent point, Cel! Thank you, Morris and Shirley. I wouldn't care too much for the jacket either!

geesh.. maybe this one isnt so bad.. hes annoying because he likes human food.. not humans as food.. :)

I thought someone left in a hurry, leaving behind their jacket, that would be me if I had been there. good shot though, Thanks texasstar.

Thanks, Ank, Robbos & PLG, I'd be scurrying off right away! Thanks for the info, gemstone. That's a good warning, if you see scat, you better scat!

Not a sight I'd want to see around the camp sight....

Sounds more like a black bear, tex. While grizzlies have been known to frequent Banff and Jasper (where they have killed people), grizzlies prefer high country and tend to be loaners. Black bears do become camp pests if the pickings are easy and usually, rocks and loud noises scare them off. Grizzlies are far more aggressive. There is a sign posted in a park somewhere telling hikers to watch out for bear scat so that the hikers can turn around and leave the area. The sign says that black bear scat will contain berries. Grizzly bear scat will contain bones and bear bells.

Yep I shoud go, really. But I love the photo.

My niece took this picture at their campground, Mimi. I was going by what she called it, Gemstone, which may or may not be correct. She said the bear was very annoying and they threw rocks to make it go away. I, on the other hand, would have been fleeing the campground instead!

Maybe a black bear? Grizzlies usually have a very pronounced hump on their shoulders and tend to be a bit lighter in colour.