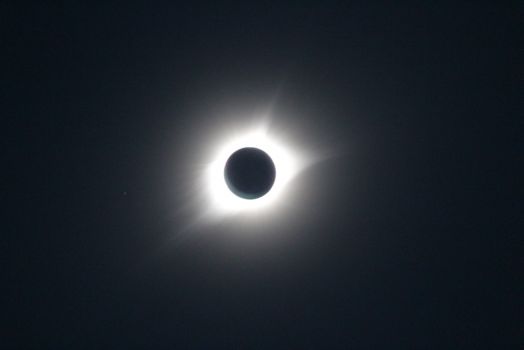 One of the pictures I took during the Eclipse on Aug 21, 2017.
Created by racoonstar Published 21 August 2017
Why this advertisement?

We missed this eclipse due to very heavy cloud cover. Thanks so much for posting this great shot! Bernadette

@Jbprols2 - I have a Canon EOS Rebel T3i digital camera. It has a rotating rear LCD screen that you can use to preview the shot, which I used so I wasn't looking directly through the lens at the sun. I took a bunch of pictures, then chose this one to post as it was the shot I liked the best.

WOW! This is a great photo, how long did it take to get this shot? What kind of camera do you have? TFP

We married in July 99, and one of the wedding gifts were two paire of eclipse glasses.Our honeymoon trip was to France, Loire Valley. At the day of the eclipse we took the train to north of Paris to watch it. What we did not bring with us -- at all --- the eclipse glasses!!
Thankfully it was quite cloudy an we could watch it, and a couple near by lent us their glasses for the big momemt :0)
Unfogetable moments :0)

I also had a chance to see a total solar eclipse once, we travelled from Slovenia to Hungary to the central path. :) That was the eclipse of August 11th, 2001, it was a very deep experience, I remember it very well to this day.

TFS, I will always remember that day.⌨️

Congratulations for the photo!!

AWESOME!!! Thanks for sharing this with all of us, it's very beautiful!!!....Monica

P.S. I love your avatar! I collect raccoons, their all over my house, inside and outside in all of my gardens.

A great photo racoon!
We drove 54 miles to be in the perfect spot for totality. Impossible to describe, isn't it? The sharpening of the shadows, the drop in temperature, the all 'round sunset and then, the eclipse itself! Wonder and awe were our adjectives. WOW! We met an eclipse chaser (this was his 9th) and he shared insights and ideas, plus pointing out the sunspots while we were waiting for totality.
It took us 6 hours to drive back home (complete gridlock), but I would do it again.....and again....and again. 2019? 2024?

Well, I was going to let this pass, then realized sometime down the road people will argue about the date they saw the eclipse in 2017. Thanks to you and all those others who posted pics. Carol

okieclem - it was a great experience. :D


Here's the link to the university eclipse fest site:

Wow!!!! Fantastic picture, racoonstar; looking forward to your other pictures. And what a terrific time y'all must have had with the party, speakers, etc. The 'revelers' shown on the NASA network looked like they were having a grand old time. ☺

We had about 86% totality here in OKC, under glorious, cloudless skies. Used the solar glasses I snagged three weeks ago to watch its progression. We were fortunate enough to get to see the March 1970 eclipse in totality in a country parking lot in tidewater Virginia. The entire experience is absolutely one of the most awesome ones in my almost 76 years: the 360 degree twilight; the nighttime animal & insect sounds . When a rooster crowed as the sun blinked out from the shadow, my goosebumps had goosebumps. I hope your memories are as precious from today as mine are from those years ago.

Dang!!! This is glorious, racoonstar!!! Well done!!!
To top it off, a PARTY with lunch and icy treats!!! Cheerleaders, dance teams....you had it all, lady!!!

Oh, I missed the 'dot' on the right.
... I think it's time to dig out my ephemeris and find out who stood close on that day and let you know.

RitaTen - it was a great experience, more so because the University made a big party out of it, serving lunch and icy treats to anyone who registered beforehand.

And then the University cheerleaders and dance team entertained us on the field after lunch and before the eclipse, along with the marching band's drum corps.

A University Alumnus, US Navy Captain Barry Wilmore, gave a brief talk about the eclipse. He's a NASA Astronaut and former commander of the International Space Station.

We had 91 percent in Ohio River valley. Nothing like this but still rather special. Grins!☺

I think that's Mercury to the left, and possibly Mars to the lower right.

Hey Racoonstar!
Really great picture and unique in your life! Today there are a lot of pictures in Jigidi of the sun eclipse!

Thanks, that was just a quick edit of one photo.
I'll most likely be posting some more in a few hours.