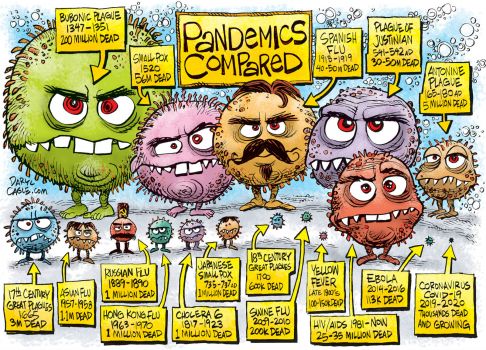 The others have been much deadlier
Created by ammy Published 24 March 2020
Why this advertisement?

@Nair_Louise You're absolutely right! I think the reaction to the virus is worse than the virus itself, in many ways. I hope all this blows over soon! Have yourself a good weekend!

Thanks ammy. You take care too! You are definitely on to something! I hope you are feeling well now. The anxiety caused from all the fuss about COVID-19 is probably not helping either. We all need to remember to keep calm and try to put things into perspective. Instead of thinking on the big scale, that is "OMG this is affecting so many countries and there is nothing I can do" focus on what you can do for yourself and your own family and close friends. It might make it easier to handle.

@Nair_Louise Yes, the bushfire haze could have weakened your lungs paving way for the bacteria to flourish. I too had wheezing for about a week back in late January because there was a fire at a landfill in our neighbouring country, Malaysia, and the smoke blew across the coast (northeast winds) to us here on the eastern side of Singapore. Haze is particularly damaging because of the PM2.5. Take care and get well soon ❤

I live in a care facility because of a disability and we have been on lock down since before the government made us do it. I was unlucky enough to come down with a virus which is not COVID-19 thankfully. It's bacterial pneumonia. My mother and I were out to see a movie and I suddenly felt really sick. I had a feeling something like this was going to happen. It has probably been perpetuated by the extreme heat, bushfires, floods (I live in Australia) and the stress associated with that. The Gods indeed Must Be Crazy (to misquote a movie). Our united strength will get us through this crisis.

@hrichrod You're very right! SARS was pretty deadly too - 10% fatality rate; also not mentioned in this image (I guess because it was contained within Asia and very few people died, relatively speaking). It was in Singapore at the time and we were so terribly afraid - 2 of my relatives actually died of it. My cousin-in-law was one of the respiratory specialists at the forefront battling this disease back then. We were so worried he would get infected! (Luckily he didn't.) Scientists say COVID-19 is in the same family as the SARS virus - it probably learned not to be so deadly and debilitating, so it could proliferate more widely! No sense in weakening or killing off your host so quickly without enabling them to spread it to more people first!

Some things (like ebola) were much deadlier to start with - by percentage... you caught it - you died - pretty much every time (at first). Not so with the c-virus - you can catch it & survive it (with luck).

Lots of people are walking around with the c-virus and are asymptomatic; or - are only mildly sick. A lot of people have been sick and recovered. Now that we know it can be passed to the next person for 14 days if you are infected, what (we) are trying to do now makes sense. Thousands of people died in Asia from the Bird 'Flu, but I see that's not even mentioned on this - because it never traveled anywhere else, even though it occurred in a time of nearly instant world travel, just as today.

Virus(es) mutate; what came out of pangolins had to mutate to get into people, then the virus had to mutate to pass from person-to-person, which is why virus change with time and why they go dormant, or spread, etc. It's a stupid virus that entirely kills the host species, because that kills the virus, naturally.

And yah, bubonic plague does crop up in the SW :)

@zumbachick You're right! And the bubonic plague is still around even today! See: https://www.healthline.com/health-news/seriously-dont-worry-about-the-plague
But it's fully treatable and not deadly anymore, because we have antibiotics for it (it's caused by a bacteria and not a virus). :) Still can't fathom why people insist on going to work even if sick. :(

Bubonic plague appeared a couple times in our history. The Hong Kong flu I remember my teacher came with a cold sneezing all over us. Should of stayed home. Noe the Spanish amigos was very bad bad flu

@sara1 Glad you enjoyed it! I've to get down to finishing it myself when I have the time!

This is not even half way through yet. It is going to get hugely bigger very soon.

Yes, but the size of the bug relative to the others is the point of the image, and this is totally wrong. It gives the impression that covid-19 is nothing to worry about.

The images does say "thousands dead AND GROWING", so we know that this is current and ongoing.

You can only include Covid-19 after the pandemic is over. While it is ongoing the information is totally misleading.
We have no idea yet what the total death toll will be like.