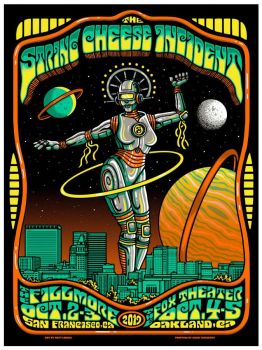 Where to start..? Where to start..? Let's see.. okay, just showin' you I CAN work with this century, even though I prefer the innocence and bands of the early posters (and will be returning), but here's something for you on a day you might need to see a robot with a Hula Hoop. We all get them from time to time, I'm sure.

Very reminiscent of Fritz Lang's 1927 silent film 'Metropolis', this shares a vision of a grim futuristic society, and if you don't think our future looks grim, you live in a cave. On Mars. With no wi-fi. Let's concede our present isn't looking much better. But you did not come here for a lecture, so let's poster-up, shall we?

Matt Leunig designed this for concerts in 2019. The Fillmore episode was October 2 and 3, and there was another occurrence in Oakland October 4 and 5. You see, the show featured the String Cheese Incident, and there was a lot of effort to hush it up. String Cheese running amok is not good for business, and things at the Fillmore were not going smoothly ever since Bill Graham died. Really, what runs smoothly with string cheese gummin' up the works? See, it's already oozin' out of the robots elbows, looks like. Kinda like my stomach oozin' out of my pandemic pants... when did this happen?

Well, maybe that's an omen - get a Hula Hoop and start gyrating. Or stompin' on a city. You don't want to cause an incident the next time your pants split in public...

And where pray tell are the comments from the other 40 Jigidian faithful that came, and saw and conquered your witty puzzle yet left nary a comment? Not even a 'thank you' whispered ever so softly as if fallen unto the ears of corn yet to be harvested, forgotten in the waves of amber grain?

"Out, damned comment! Out, I say!—One, two. Why, then, ’tis time to do ’t. Hell is murky!—Fie, my lord, fie! A note, and a comment? What need we fear who knows it, when none can call our power to the shapely kitchen robot?—Yet who would have thought the old man to have had so much nonsense in him."

Well, you know me... mild mannered TIM living a humdrum life in my humdrum home town of Jigidi USA. But at the first sound of a mispronunciation, bad syntax or an odd number of ceiling tiles in my Doctor's office I quickly change into... OCD Man... keeping the world safe from errant punctuation and dangling participles. And my first assignment today? Correct an errant and unnecessary sentence in last night's comment. And now the world is a better place.... Thank You, OCD Man!

No apology needed - ever. Yes, it IS just you and me, but that's okay. People probably didn't always understand Hawking, Einstein, Weird Al Yankovic... Good thing I don't count on dues for joining our club. I'd be one broke-ass (yeah, I said it... cause I'm down to earth...) poster poster.

I was thinking you must be heartbroken knowing some scrap metal hussy had stolen Gort, your main squeeze. But then I realized this was a modern day poster submitted by some lazy ass artist (I feel safe spewing profanities on your puzzles since it seems to be just you and I... and I'm guessing you have a better "down to earth" vocabulary than I). Yup, I said a lazy ass artist. Seems as if the 60's artists you mentioned, including the so-called Big Five poster artists—Wes Wilson, Alton Kelley, Stanley Mouse, Victor Moscoso, and Rick Griffin- would spend most of their days smokin' dope and gettin' high, but they still found time to produce a new poster every week for the next weekend concert. And Matt Leunig? He managed to produce ONE poster to be used for FOUR different concerts at TWO different venues. Matt Leunig must have been the king of the water cooler in his office

And for just producing one poster I am sorely disappointed in his effort. Obviously he drew this sheet metal heart throb while in the kitchen, between 12-packs of beer and countless bags of Spam flavored Cheetos. How else do you explain the colander head piece surrounded by 15 dots (15 dots symbolizes 1 7/8 cups, which anyone who has been around a kitchen knows 1 7/8 cups equals 15 ounces). And what about the two cheese balls in the background? I thought the stuff oozing out of her elbows was pasta... or extra long robotic under arm hairs. And remember what the Beatles said about robots created in the kitchen...

But I didn't stop in to diss a lazy ass artist, I wanted to thank you for introducing me to the String Cheese Incident (SCI). I could not get your link to work, so I dialed up SCI on Youtube. At first I thought they were quite good, very tight and talented, especially their covers of Led Zepplin, the Stones, Van Halen and others. Then I watched "Illegal" only because it said it was a single... the video showed photos of the band. One band mate looked like Jerry Garcia, a nice pleasant looking man, but another band mate was wearing sandals... with NO SOCKS! The sudden exposure to the gnarly toes, fungus ridden toe nails and the imagined odor of Andre the Giant's bowel movement almost made me pass out. I will be a while before I will be able to listen to SCI again

Sorry for the length of this comment, but I felt compelled to make up for the other comments that got lost along the way to this puzzle