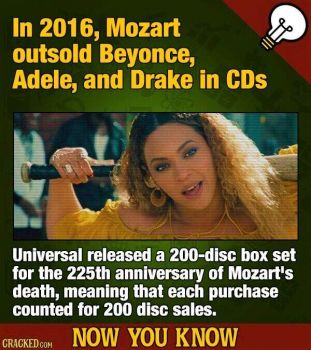 "Just because you listen to a lot of music doesn't mean you know much about it. Here are some fun music facts to bring up the next time your favorite pop star is on the radio."
Created by Mischka Published 29 July 2021

Sorry for not saying sorry in enough places....
Thanks for understanding, Hoff. I knew I could count on you.

yaya for Rob for returning to the fold. I know you would like to apologize for worrying us, but it is not needed.

Hmmm... looks like that middle singer's been forgotten already. :-(

Well, when he knew he was being watched...
have you *seen* the movie?!

That is because Mozart's music had the greatness of talent. He didn't feel the need to grab private body parts and wear absolutely no clothes while screaming into a mic, and they claim to be talented singers. I do like Adele's music. ;-)

Who ever suggested that Mozart could sing? He didn't sing in the movie. You'd think he'd have insisted on that in his contract, if his singing voice meant anything to him.

People listening to Beyonce, Adele and Drake don't buy CD's. They download or stream it to their smartphones.

They waited until he was dead to promote his CDs. Drake and Beyoncé are still alive. Maybe after they have been dead for 225 years, THEIR albums will surpass those of Mozart's.

When I had just taught myself to whistle (age 23, so mid-'70's) I would walk to work practicing the Andante Cantabile, or parts of Eine Kleine Nachtmusik. But so many people looked at me like I was out of my mind, or out of their century, that I had to limit that sort of thing to times when no one's around.
So the pandemic, when the streets are often empty, has been a little blessing in a big disguise. :-/

When I was a kid, someone told me that Mozart was a skin disease. 8(

Because to sell so many cds without even having a tour is quite an accomplishment. He DID attempt to have a singing career as well. He asked my opinion, and I told him he was off key and sounded as if he had been breathing helium. He had never tried helium, and immediatly ran of to the nearest Walmart and spent the next week breathing helium and laughing.

Ok, but did Mozart actually sing? I thought he was famous as a composer. So this comparison seems a little off to me.

Perhaps someone can explain to me why he should be considered as pulling a fast one over Drake and Beyoncé.