Why do fires all stop at the Canadian Border?? 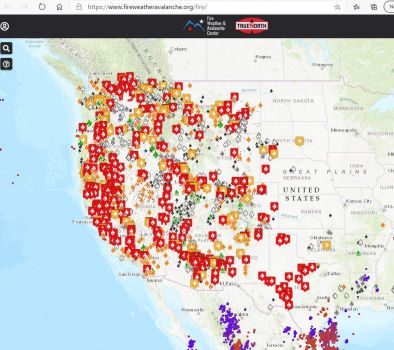 They have forests too
Created by yarnover Published 15 September 2020

Thanks for sharing, such tragedies to add to our biggest problem.

Go to the site that put out this map and click on the individual fires they are listing. You will find that many of the fires they are showing have been out for anywhere between 2 weeks to 3 months - some as small as 0.1 acre. By the same token - I know of 6 small (5 - 10 acre) fires that have been in our area that are NOT listed at that site. 4 of the 6 were human caused -the other 2 were caused by dry lightening. We've been in a 'moderate drought' all summer but are now in a 'severe drought'. Hopefully, we will get a good early snow pack so don't get a repeat of the Dec. 11, 2017 Legion Lake Fire that burned 84 sq. miles before it was contained on Dec. 19, 2017. (3rd largest recorded fire in the Black Hills since records were kept.

beyondwords - thank you for the links, I had forgotten about the Fort McMurray fire of 2016 It was horrible and so fast moving.
Motherofsleep44- I heard from a friend in New Hampshire tonight confirming that they have our smoke too.

The smoke from our fires on the West Coast is settling in over Washington, D.C.

And from the British Columbia 2018 fire season:
https://www.jigidi.com/jigsaw-puzzle/2btrihuq/the-fire-skies-of-2018/

Well, smoke certainly doesn't respect borders. See
https://www.jigidi.com/jigsaw-puzzle/rtku2g90/swan-lake-in-the-smoke/ https://www.jigidi.com/jigsaw-puzzle/f0yuakgm/fiery-sunset-september-11-2020/
And we've had some serious fires in British Columbia and Alberta (I don't know much about other provinces). The 2016 Fort McMurray fire was the worst I'm aware of. Right now the fire risk in some areas of BC and Alberta is very high or extreme. BC currently has 25 wildfires of various sizes. I'm not sure of the current count in Alberta.

I may have misspelled the lady from British Colombia's screen name. I don't follow her now.

Thanks triciab5581 - I did look further and discovered that 2020 has been a very light year for fires due to wetter weather and shutdowns caused by Covid-19. Donnajames--I agree - nor do they have wackos starting fires. motherofsleep44 - looking for Mazzy.
Carol66-- I had forgotten about the 2018 fires in BC--probably because so much was happening in the Bay Area

2018 smoke worse than what we have now......British Columbia fires.

They had wildfires in British Columbia recently. A lady whose screen name is Mazzy talked about them with some of us quite a bit.

Because they do not have the tree-huggers that say you cannot clear the underbrush. That should be cleared out - it is just fuel for the fire! dj

It's a U.S. agency, so the map depicts fires in the U.S. I'm sure Canada has their own agency for such things.