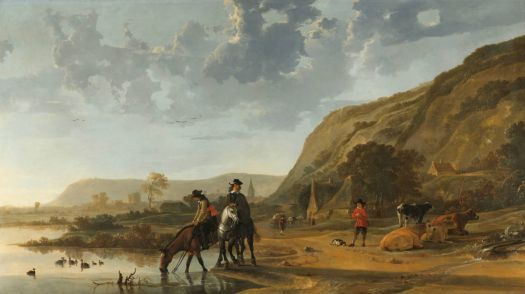 "This is a panoramic, sun-drenched river landscape – somewhat hazy in the distance – with sketchily drawn clouds. Two Dutch officers halt at the river, and water their horses next to a herder and his resting cattle. This idyllic scene does not unfold in Italy, but along the Waal between Nijmegen and Cleves, where Cuyp made landscape drawings that he took back to his workshop in Dordrecht. "

From the site Artsy:-

Landscape painter Aelbert Cuyp hailed from a family of artists; his grandfather and uncle were glaziers, and his father Jacob Cuyp was a successful portrait artist with whom Cuyp would professionally collaborate (he would paint the backdrops while his father painted the figures). Cuyp’s own works were characterized by their frequent featuring of bucolic landscapes and narrow range of color—a hallmark of the tonal phase of Dutch landscape painting. While his early style was influenced heavily by Jan van Goyen, with whom he studied, his mature style was hailed for its use of atmospheric lighting, richer hues, and more lyrical compositions. Cuyp is often considered an inspiration for Johannes Vermeer’s handling of light. He also painted still lifes, animals, and portraits.

You're right, Bill. Where's all the ice and the community skating and playing games?

We're not used to seeing idyllic scenes like this set in The Netherlands, but why not? Everything seems as it should be. Thanks, Gayle.