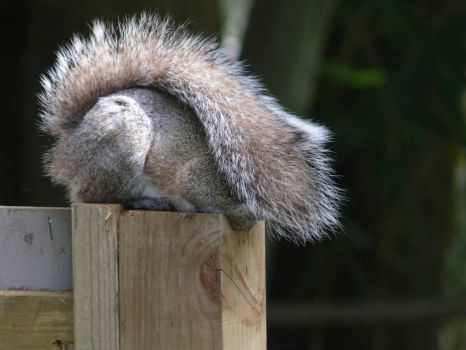 Young squirrel napping on a fence post.
Created by jyl Published 15 May 2015

jyl, pretty sure we all benefit from the proximity to each other. A 12 in Canada, well, yes, that makes sense. Luck you to have attended actual games. i hope they won both times--or at least played a good game. It is sad we need passports to go between our countries these days. Washington, like your island, is predominantly rural which always seems to make for a slower pace and happier folks. Ham happy you have been over our way. I love living in the Pacific Northwest. We have such great weather and beautiful scenery. ;-))

Hi, @kayboblee ! Not sure this is a gray squirrel; we have many more "reds" than grays. The gray we see on this pic might be an immature coat. I agree, squirrels have great coats, but most likely not waterproof or sufficiently cold-proof to make it across the Strait of JdF.
I love WA state, too. I'm a 12 and have attended (alone) a couple of games years ago, before I needed a passport to go across the strait.
Have been to WA a few times as a tourist and love your people, too. Many of your neighbors seem to recognize our "accent" and treat us as visitors rather than invaders, even at a Seahawks game.
Go Hawks!!

Sorry, not sure the previous post made a lot of sense as I reread it. I follow a photographer from Victoria who posts nature photos from the area and I think I recall her commenting on gray squirrels not being native up there as well. And, no, I didn't think it was this particular squirrel who has invaded our area. He would have quite a swim, wouldn't he? You are so lucky to live where you do. Washington is lovely, too; but my hubby and I just love Victoria, the Buhart Gardens and other area gardens--and the people are just as friendly as they can be. ;-))

@jyl Thanks for the reply . Did not mean this squirrel specifically was in our yard or area--just gray squirrels that look a lot like him. Haven't checked to see if they invaded your area aa well but now that I think about it I think another jigidi posted a photo she took of one and said so--'cause I vaguely remember thinking, oh, there, too. Thank you for the kind and thoughtful reply. ;-))

Hi @kayboblee ! Sorry, I have no idea which variety of squirrel this little one is (or was). I remember it was young (just because it was smaller than that spring's crop of squirrels). I live due North of WA, but I doubt this guy is one of your invaders because I live near the Southern tip of Vancouver Island.
Thanks for enjoying the puzzle and taking the time to comment on it.

JYL, something I am so tickled about with jigidi is we can go back and solve puzzles this old. Is that a gray tailed squirrel? They have invaded Washington state and pretty much run the native red-tailed squirrels which are much less aggressive. While it is a cute picture and that is what caught my eye, we deal with all the problems they bring--raiding the food stations for the birds, chasing our cat, and attempting to crawl inside the insulation under the house and use the bathtubs to get warm. We have remedies for all except making our own yard more for our cat and not them, but we still end up chasing their antics rather than having any permanent solutions. Cute and sometimes fun to watch, but troublesome. ;-))

Thanks for my best laugh of the day so far, Mat!!

They are interesting, aren't they, Evelyn. I particularly enjoy watching them in the spring chasing each other up and down the trunk of the Western Red Cedar tree in my back yard. However, I suspect they are at least part of the reason the Steller's Jays no longer spend much time around here.

Smudgey may be wiser than you realize: squirrels can be carriers of parasites that can be fatal to cats. Our local cats avoid the squirrels because every so often if the cats are chasing them, the squirrel will turn around and chase the cat.
I like the Tsilhqot'in name for them: dlig.

They are cute but destructive, my chicken coop squirrel likes to take bites out lots of apples in the orchard. Smudgey the cat seems completely disinterested in it. He is a crackerjack killer, he brought home a rabbit the other day.

And here I thought it was using its tail as a parasol ... we had some pretty warm days back when this was shot. Silly me. ☺

maybe he's on a private call on his tiny little squirrel cell phone [shaped like a peanut, wouldn't ya know?]
he must've spotted you with your piccy-snapping device and guessed you to be spying on squirrels [they think we're reporting to dogs, by the way].

Love your sense of ha-ha, SlapHappy! I've seen this same squirrel since doing the same thing a few times. Makes me wonder if it has narcolepsy. It looks and acts normally most of the time.

must be a fugitive, running from squirrel law enforcement...probably stole someones nuts

Glad they managed to get the fire out, but the poor farmer still lost some of his crop and therefore some of his income. It's scary to hear about such a small thing starting a fire--a local fire department tells us that southern Vancouver Island has the most hazardous situation around new fires in the whole province. It was sometime back in April that we had the last measurable rain and the temperatures here are going up to the high 20's most days now. Yikes!!

Yes, jyl, we learned to dislike the squirrels up in the Yukon where they try get into your attic, destroy the insulation, chew on wiring ... just like mice ! But I do like to watch them in their environment and I have to laugh when they chit on something !
I hadn't heard about 185 fires but I would not be surprised. I drove to Midway yesterday and saw a hayfield half burned. The farmer was baling and hit a rock with his machinery, a spark flu and that's all it took. They were lucky and got it extinguished but it could have been major !

Connie, I forgot to mention, this afternoon a local radio station said there are 185 forest fires burning in BC now, and more starting regularly. :-(((

Squirrel pictures are often cute, Connie, but I reserve the right to dislike the critters. They pick fights with neighbourhood cats (which may be okay) but they also raid birds' nests and either destroy the nests or eat their eggs. This I cannot condone, especially since people around here have been told about the damage the squirrels do then continue to feed them.

For some reason I am partial to squirrel photos ! jcarroll got me hooked on them ... this one is precious, too !

Nobody woke this youngster, quique. I was back in the house before it moved away from an unwise choice of nap space. ☺

Now, C'mon! They work so hard gathering nuts, is it really necessary to wake them and chase them?

We need more squirrel chasers around here, Jesse; there are lots of cats, but they know squirrels bite back and the dogs are on leashes. Baby was there long enough for me to take a few pix; this was the best one. Thanks for visiting. ☺

As usual, els2, you have come up with the ultimate comment. Thanks for sharing it ♥

I like my covers over my eyes, too! Thanks, jyl.

Good to hear from you, Dave. He's quite young (the tail isn't fluffy) and I suspect he just got hit by a nap attack. It's the first time I've seen one sleeping any place other than far up a tree.