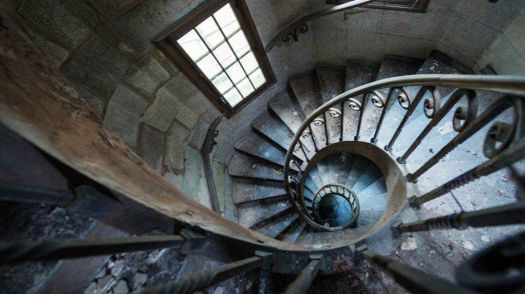 While this is labelled as a building puzzle, it is anything but.

What a beautiful study.
Created by dhi Published 1 June 2020

I had never thought of them as having a defensive design. Glad you stopped by Val & Donna.

Super interesting. Had never thought about it as a defense! I was also looking at the wear on the stair treads. Love this. dj

Hi Birgit, that is what gave the idea. I piggy-backed.

One of the main reasons that the clockwise stairwells were used is because they allowed defenders a greater range of movement if they wielded their swords with their right hands. Those stairwells also diminished the ability of attackers to properly swing their swords, since right-handed fighters would have had to to contend with the walls while making their striking motions. That cut down on their ability to maneuver and it gave the castle’s defenders a much needed advantage. Of course, there may have been some left-handed attackers who wouldn’t have been as affected by the close quarter spaces. But as a design element, it’s hard not to be impressed by the thinking behind it.

Even the stairs themselves served as a defense, as the report notes that each step was designed to vary in size. While the castle’s inhabitants would be familiar with the smaller and larger steps, invaders could easily lose their footing and slip during battle if they misjudged a step.

This is similar to the image I posted a few weeks back and just as interesting in the spiral...going up or down? The perspective leaves you wondering where the stairs are turning...hmmm. building puzzle, huh? That could mean anything, really...lol

You are most welcome.
Have a good evening.