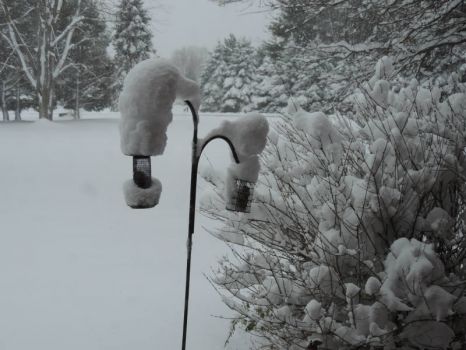 Ten inches plus and still snowing!!!
Created by lyndee Published 21 November 2015
Why this advertisement?

Where are you my friend? hope to see you back soon.

You be okay, Lyndee? Missing you!

Are you trying to scare us with the new avatar lyndee?

Sure hope it quit before now Lyndee. Hope you are doing fine and missed you while I was gone. Hugs♥

I'll swap you our rain for your snow!

Happy Birthday Lyndee and many more!

I hope you had a Merry Christmas Lyndee!!

It's beautiful ... but I hope it melted quickly.

Hoping all is well, Lyndee, and that you had a nice Thanksgiving. ♥

Oh my - that's a LOT of snow! Hope it's melted by now and you didn't get more. It is pretty though.

Poor little birds, it's amazing that they survive the big storms (thanks to your help).

You really got it! Snow bands missed us completely. Still waiting for the first onslaught.

Wish we had some snow cover for the crops.

Lyndee, that looks SO cold. Poor birds. We had a hot week predicted with 38 C on Thursday (100.4!) so I'll send some over for you. Great photo, thanks and hugs.

When did you move to Alaska Lyndee? no snow here yet!

We also have snow but not that much.
Winter!!

Come over here lyndee...it won't be following you for sure, but doubt you can endure the excessive heat.

Oh my, I feel for you Lyndee, glad it is melting....maybe there will be no more of it, at least not in the next week or two :)

Thanks everyone. It's winding down now and I think it is actually beginning to melt some. Pretty, yes, but snow is just not my cup of tea!!!! :)

Wow! Only a dusting up here so far.

Holy mackerel, Lyndee. When you do winter, you go all the way!

Are you sure that's not a squirrel in a white fur coat sneaking food out of the feeder?

O no, not yet. Keep it warm Lyndee. But thanks for a beautiful photo. ♥♥♥

Got the shovel ready, Lyndee? hehe