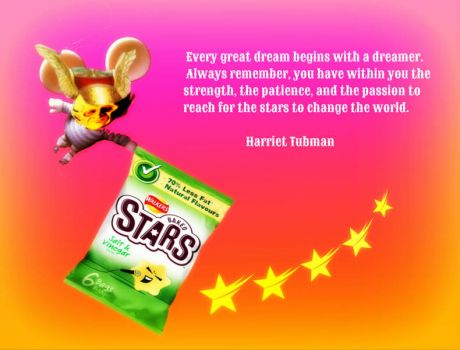 For those who feel a hunger for vanished stars.......
Created by lelabugosi Published 2 January 2016
Why this advertisement?

StarryEyed mentioned Pogo, the cartoon 'possum, which reminds me of the guy who tried to board an airplane with a dead 'possum in each hand. He forgot you're only allowed one carrion per passenger! Ba-da-BOOM!

Perhaps you need one of those trendy hoverboards, Mr. Cookie. Just not one of the exploding ones.

I have some you can have

I do believe I am the best Snowboarder in the area, second to none, top of my game, a true champion, and pretty darn good for a pile of rocks.
We are at this time in the grip of El Nino and completely devoid of the frozen white stuff.

Mr. Biscuit...have you taken up snowboarding?

Yes we all are waiting for news.. and new puzzles, also, as well

Ohhh, a truly faithful follower! No, still waiting - thanks for asking, precious-pebble!

Any news as to upcoming events? Hope you are both well.

Sir Winnie looks fine to me.

Sir Wainthorpe - you are upside down - are you sure you are quite well????

Sir, W that all depends if you would like to play Cops and Robbers.

Ms.Mreep.....have you been made a sheriff?

What a lovely poem ♥

Hanne-with-or-without-pipe......A Taser is an electroshock weapon.......ZAP!
Thank you, shiny-twinkle!
precious-pebble......it is a hat bequeathed to me by the illustrious French General, Alphonse Le Bugosi.........and, HMPH!

lela wears many hats, I see...his "disguise" with the large ears, his winged Mercury helmet for postal deliveries...and is that a "beanie" as well? Must have a rather large head to accommodate all those hats!

this is beautiful dear lela xxxxxxxxxxxx

Oh Wainthorpey, of course I can help you.....that's why I am here.....you will need to step behind that screen and strip down.....and I'm sure once you remove your helmet and all those other leather things you will be overcome with calmness......meanwhile I will softly hum the Bonga-Bonga National Anthem.....

What is a Taser?? - by the way wicca - I talk very much with crows - and with dogs too Dogdaze... with sparrows, spiders, mice and whatever... they are mostly VERY kind...

Nurse Duckface.....Every time I see you, my heart skips a beat, and my body tingles.....can you help me?

Miss Heidi, I think it's time for your medication.....

In my nursing experience there are very few who are, what you would call, sane......except dear DrAdonis who is truly always on top of things......

I'm PROUD to be barking mad!

Welcome to the looney bin. Do you know anyplace else people have conversations with crows?

Some of us are Barking Mad

Gosh, you people are so adorably goofy!

Will it be a year of "starry, starry nights"...

tomorrow is Jigidi's 9th Birthday and so a brand new year

I never even used the favourites!

I liked my star because it gave me the favourites facility, no other reason to have one, now we have Followed instead it's much the same

Stardust is what fairytales are made of..... lots of fairytales to be told now....

Spot-on, Juneee! I never had any special attachment to my star, precisely because of that reason (although everyone is now denying any hint of 'elitism' among 'All-Stars')........Just like losing a glove.......sort of......

this star stuff reminds me of Dr Seuss:-

But, because they had stars, all the Star-Belly Sneetches
Would brag, “We’re the best kind of Sneetch on the beaches.”
With their snoots in the air, they would sniff and they’d snort
“We’ll have nothing to do with the Plain-Belly sort!”
And, whenever they met some, when they were out walking,
They’d hike right on past them without even talking.

No, no, I just thought wicca was a commie for a little while there. Nothing wrong with the old Jigidi stars, of course, but they're gone and I guess I wasn't as attached to mine as some people.

Me too - a beautiful bright red star!

Oh! Don't go to wicca's puzzle and look! It's too disgusting!

I don't need a star. I AM a star. http://www.jigidi.com/puzzle.php?id=M7WVVFXF

Twinkle Twinkle what a hat!

Ha ha, Jim, you always give me such a chuckle :)

Wow, Heidi! That's a lot of pieces put together :)

It's HARD to get the number of puzzles and pieces to come out with ''000s'' at the end!

Sorrriiiii - but there are MANY....

those are not all of them

I think that the stars were simply eaten.....alive!!

A black hole is a place in space where gravity pulls so much that even light can not get out. The gravity is so strong because matter has been squeezed into a tiny space. This can happen when a star is dying. That's where they have gone but they won't keep it alive

Suddenly, I felt the strong pull of gravity toward this destination! Weird, huh?

I am glad to know that the public will finally be enlightened!

NOW!!!! IT IS HERE!!! The sensational, hair-rising story about how the missing stars were found!! Follow this special and only for you trip into space from tomorrow on Hanne9!!!!!

And Mr. Christmas Carol has a new avatar, too! BUT I NEVER really consider him a "cookie cutter" personality!

I too am confused .. also .. as well, it sounds like Mr.Squirty has lost his star and had a sex change.

And HELLO, StarryEyed. I take it that you're suffering from red star withdrawal, too?

Claiming sanity while commenting with this group is a sure sign of insanity.
Anyways, sanity is both overrated and boring. This is NOT a boring group.

If you still hunger to see our stars, click on your user name on the top right corner, and go to ''Followed Users''. TPTB forgot to remove the stars there.

what a knowing little brat he is

Having seen these days coming, and having planned ahead like any smart person, I now introduce you to - - TA-DAA - - the next poster!

I don't need to buy one of these 'cause I'm sooo good.

"Come quickly! I am tasting the stars!" -Dom Perignon - (but only crumbs? That takes the biscuit!)

The postal service, which is beyond reproach, is run by our glorious leader.....who happens to be me.......

AHA!!! Just as I suspected! In Canada you cannot sue a Crown Corporation without the Courts permission...I wonder if it's the same in Bonga Bonga...or could I sue those little red pants off the offender...

I seem to have suddenly received an avalanche of parcels to deliver........under such exceptional circumstances, some contents are sure to suffer damage.......
Of course, that's the way the cookie crumbles........

Crumbs! All I got was crumbs! Who's delivering those cookies anyway? Can't be the Girl Guides!