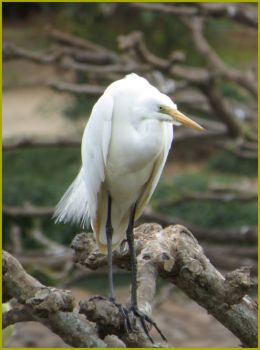 The Carnival of Flowers is on for 10 days and we went last Sunday.

Toowoomba is 125km (75miles) west of Brisbane (1.5 hour drive) on the edge of the Great Dividing Range and is 700 metres above sea level. Because of this elevation it has a cooler & dryer climate than Brisbane.
Created by robryan Published 28 September 2014

Fabulous!!
Toowoomba is a lovely place & it certainly is cooler than Brisbane, but it got quite cold in winter, especially in one the RAAF houses!! Lived there for 4yrs back in the 60s - Dad was in the RAAF!

He was just resting and grooming Suzy - thanks!!!

Wonder what has his feathers up? :)

WOW!! THis photo is enough to have me considering changing my name from warbler to egret!!! Its perfect!

Thank you for all your compliments - they are much appreciated:))) I've been a bit busy - so haven't
had much time on Jigidi!!

Great picture of such a beautiful bird! thanks Rob.

Beautiful photo Rob. I didn't know they lived there, too. He does look a bit chilly.

LOL!! I hope you get some Janet - we had storms go through quick-fast yesterday evening and had 7mm in the gauge, which was nice:))) Thanks!

My pleasure Jacki - thanks:)))

That's a great photo, thanks Rob. Yes he is hunched over, maybe waiting for that rain. Maybe I should try hunching a bit, as it's feeling a bit like rain this afternoon, but not much in the way of likely clouds.
Hugs, janet

I think he'd always be on the lookout for food Marian:)) Thanks!

He looks like he is definitely studying something ahead of him....

He was in a tree on the edge of a large pool Heidi - with water all around him, and most likely fish!! Thanks!

A fine set today, Rob. Enjoyed them all.

so tamed compared to the other photos i have seen in JIGIDI...good shot rob.

These are wading birds, so they need big feet to keep from sinking in the mud.

Hi songbirdj - he was resting in a tree and doing a little grooming - but when he's in 'fishing mode' the neck elongates!! I don't think he has many R'Egrets:)))) Good one!!! Thanks!!

I've never seen one smile Floyd:))))) ...but the weather was cool and rain started just after we left here, so maybe he knew what was coming:))) Thanks!!

Sometimes The World is harsh. Hunch your shoulders against this.

He does look a little sad.
Thank you Rob for sharing his picture.

It sure is long legged Rob....and big feet too...thank you for this one :)

What a funny pose. Does he always have his head lowered like that? He looks like he 'R'Egrets something he just did. :)