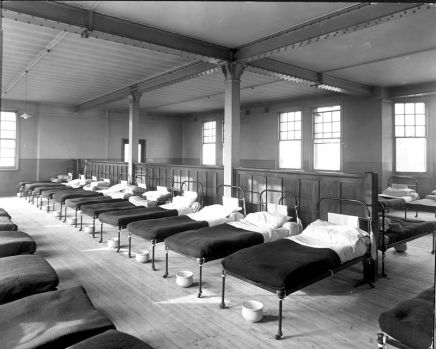 Created by karli Published 1 November 2012
Why this advertisement?

worked in my inlaws hotel in the sixties. One old lady who stayed there regularly insisted on having a chamber in her room and the chambermaids were supposed to empty them. One woman refused to do it, this was 1968 and we were employees not servants so that was the last potty in that hotel. there was a toilet right opposite her bedroom door too

actually I am quite impressed with the cleanliness of the place. Lots of windows and light, somehow workhouse conjures up horrible pictures of squalor. I guess part of the work was to keep the place tidy. glad you read up on Cornelius, these little potted histories lead to all sorts of information on google

I just googled Cornelius Whalen, there's quite a bit about him and the Crusade. Well worth a read.

Will you look at those 'potties or chambers' my goodness they take me back more years than I care to remember. What a sad thing to remember as one highlight of one's life June. I wonder if his passing prompted a report of the March in any of the newspapers.

Cornelius Whalen was the last Marcher to die, it was in 2003 and he was 93. Ironically, Mr Whalen and fellow marchers were put up for the night of the 4th November in a workhouse in Smith Street, in the east end of London, after receiving cold comfort from then Prime Minister Stanley Baldwin and his government at the end of their trek to London. While never a sentimentalist, Mr Whalen treasured his admission ticket to that London workhouse until his dying day. He had a beer named after him called Old Cornelius