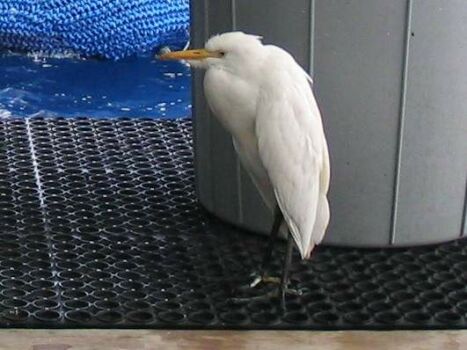 Created by PaxLab Published 8 January 2022
Why this advertisement?

I'll settle for cattle egret, although leucistic frigatebird would be more fun. It would be a non-breeding adult, as that's when the adults are pure white. The juveniles have black bills, at least according to the photos in All About Birds. And a storm could have driven it into the water. Good thing your boat was there to rescue it, PaxLab!

Wish I could remember more. Perhaps a storm? While I don't think we were very far from land we were too far to run it ashore.

LOL Ginni!!!
Apparently my brain never registered the trash can. After I saw the close-up I never went back to the other link. And you're right. Looking at the size of the trash can and the wet suits this can't be a great egret. So maybe we should settle for cattle egret? :)))
Unless this REALLY is a disguised frigatebird (VERY well disguised).

LOL. We were in here at the same time, schutkleur! If that's a standard sized trash can, as shown in PaxLab's other puzzle (link below), I think this fellow is smaller than even a scrunched down great egret. But I could be wrong. Maybe it's a leucistic frigate bird! :-)

I always wanted to go to the Galapagos, but I get seasick on a lake, so I'll have to wait until my next lifetime. Lots of egrets there, including cattle egrets. Rescuing him is such a good story. :-)

@PaxLab @Ginni2
My first thought was 'koereiger!' too (koereiger translates into cow heron), but I don't expect a cattle egret in the water, eventhough it eats fishes sometimes, but mostly it forages between cattle, to snatch up the insects the cows stir up with their feet.
So I thought it would probably be a great egret very much hunched down because it was miserable and tired (and someplace scary??).

The Galapagos Islands! A paradise for nature watching.

Here's the comment I left on the other puzzle:

Where were you, PaxLab? Is this a cattle egret? It has the yellow bill of the great egret I see all the time, but it's much too small. I haven't seen a cattle egret for years, but they are snowy egret size and have the yellow bill too. But there are different kinds of egrets all over the world, not just the three I'm familiar with. So glad you rescued it!

I remember they put out a tub of fresh water. I don't remember about feeding. The crew seemed to have some experience and the rest of us tried hard to avoid the area as much as we could to minimize its stress, but it wasn't that big a boat! There would have been land within a mile, best I can recall. It has been a long time!

If it stayed that long it must have been deeply exhausted. Did you try to feed it? It may have been very hungry as well. Did it have to fly very far to get to shore?

The crew attributed it to the bird being young and getting too wet. I was surprised how long it stayed, standing just like that, but off it flew the next day.

Nice white frigatebird @PaxLab
I'm guessing it's a great egret? a snowy would have yellow feet.
I've seen my herons swim, but never very far. This poor bird may have fallen in through exhaustion? At least it stayed afloat. But once in the water it will not have been able to fly off again. I'm glad you found him in time.

@PaxLab
Any idea what's wrong with this poor li'l thing? I'm glad that it got rescued!
Dusty : )