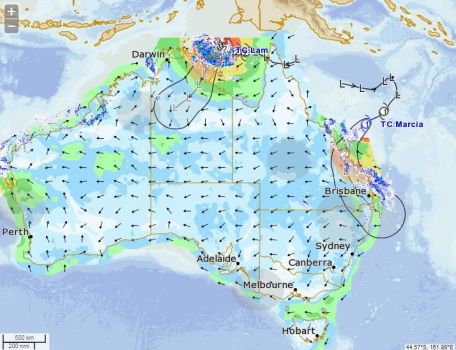 It's been raining lightly for the last 24 hours just to get us in the mood!

The generator has been filled and we've stocked up on gas canisters!!

Well, we can forget about Marcia then and start solving great puzzles....LOL

Yes Barb - we ended up getting lots of rain - 9" all up- and just very gusty winds that did no harm - thankfully!! It had down-graded into a rain depression by the time it reached Brisbane this morning :)))- The tail-end is expected to head out to sea in a few hours!! I'm really looking forward to some sunshine:))) Thanks for asking:))))

Rob, is the storm over for you, hopefully?

I hope you came safe through the night. ♥

We'll be thinking of you all!

Just keep us posted Rob and all the best to everyone in Marcia's path!

My pleasure Kirsten:)) Thanks ! The first reports are just starting to come through about Yeppoon, so it's a bit hard to tell how they fared!!

Thanks for the update Rob! I'm glad it will be less dangerous for you and Janet. And wish the best for all in it's path. Here's hoping for Yeppoon.

Thanks everyone for your kind words!!
Marcia has crossed the coast now and is expected to travel down south today - maybe down-grading to a Cat 3 and be not far from Janet by tomorrow morning! We've been told it should be a Cat 1 when it reaches the Brisbane area tomorrow night and will dump LOTS of rain!! We had 60mm (2 1/2") overnight and another 50mm (2") in the last 4 hours! So - we'll just keep our fingers crossed and sit tight! Will keep you all posted!!

My fingers are crossed that Marcia is all hype and little damage. Category 5 is as bad as it gets!

Take care, Rob and Janet. I hope you'll be spared.

Hope you came through this okay, Rob. Sounds like a monster of a storm.

Hi Everyone, All OK here so far and just a small amount of wind and rain SO FAR. I would not like to be living around Yeppoon where things are getting wilder, where they expect the cyclone to hit with the strongest forces. They are saying up to 295 km per hours winds! I would not want to be there.
Hugs to all. Janet

Wow!! That is SCARY. Stay safe Janet and Rob♥

Our weather channel does not say much about that cyclone. I guess they have their hands full with our own wicked weather here in the States. Thank you Chookie, I will be thinking of Rob and Janet :)

Please chook, keep us updated in case they will not be able for whatever reason.
Thanks :)

All the best to the ones in the path. Cat 5 is nasty. Let us know how you are doing when ever possible.

So glad you are prepared! Stay safe, Robyn!

Now it's Category Five! Extremely dangerous! I wish all the people who live in its path a safe day tomorrow! Janet.

I was thinking about you when I heard the news about Marcia. I hope all goes well for you, Rob. Take care. (•‿•)

OK, I looked up on the map and in a close up. You are in the path of Marcia but Brisbane being too far south will only get the tropical storm with rain and wind. Well, I hope you will get next to nothing from this storm...good luck! And keep us posted if you can :)

Barb, we are about four hours drive from Brisbane, so not that close. Luckily we are about two and a half hours from the coast too. I do feel for the people on the coast, north of us, near where they predict it will hit the land! It's a bit scary how quickly it has cranked up from a Category One not long ago. Hugs.


Thanks Chookies. Hopefully we'll just get the rain and not much of the awful winds. Hugs.

So, close to Brisbane?

Barb, we are near the bottom of the brown area. A bit hard to describe, but definitely in the path of it, after it crosses the coast. Julian is the Leader of the SES (State Emergency Service) here, so may be having a busy night and morning. We do not want another flood like January 2013 either! The town was cut in two. So far just steady rain. We have our generator ready too, and Julian has been out and put things away in the yard. We can just wait! Hugs my friend.

Thanks Rob for the use of your puzzle. Hugs.

Janet, where do you live? Can you point your location on this map?

Rob it's now been upgraded to Category Four! We are NOT looking forward to the wind (predicted 360 km per hour on the coast) That's a bit over 220 miles per hours. Hoping we won't get those winds. Stay safe! Hugs.

Oh boy....I remember when I lived in Florida, every time the hurricane was tracked, I was hoping it will not come on land near Tampa where I lived. It was nerve wrecking each time. I see from your replies that you are well stocked with everything you need, so good luck friend and just sit tight! Give us updates if you don't lose power!

Thanks chookie - we're definitely staying put - and hoping for the best:))) It's just been up-graded from a category 2 to a category 3!!!

Thanks Denise - that's just what we plan on doing!

Take care Rob and stay inside.

Thanks Nev - we've been through a few hairy times like this in the north:)) It wouldn't surprise me if it goes all the way to Sydney:) I just hope the rain goes inland a bit where they need it!!

Thanks Cathy - it's the wind I get worried about - so I hope it's lost some of it's punch before it reaches us! We live in a hilly suburb - so the rain doesn't bother us so much!!

Oh dear! I hope it doesn't do a lot of damage!!

Thanks Ank - we have no need to go out as I went grocery shopping today:)))