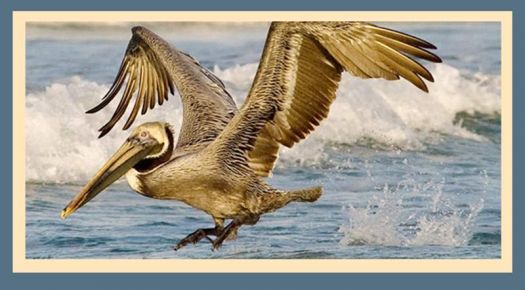 immature P. o. carolinensis, Panama
The brown pelican lives on the Atlantic, Gulf, and Pacific Coasts in the Americas.[18] On the Atlantic Coast, it is found from Nova Scotia to the mouth of the Amazon River.[19] Along the Pacific Coast, it is found from British Columbia to south-central Chile, including the Galapagos Islands.[19][20] After nesting, North American birds move in flocks further north along the coasts, returning to warmer waters for winter.[21] In the non-breeding season, it is found as far north as Canada.[1] It is a rare and irregular visitor south of the Piura in Peru, where generally it is replaced by the Peruvian pelican, and can occur as a non-breeding visitor south at least to Ica during El Niño years.[22] Small numbers of brown pelicans have been recorded from Arica in far northern Chile.[20] It is fairly common along the coast of California, South Carolina, North Carolina, Georgia, the West Indies, and many Caribbean islands as far south as Guyana.[23] Along the Gulf Coast, it inhabits Alabama, Texas, Florida, Mississippi, Louisiana, and Mexico.[19]

The brown pelican is a strictly marine species, primarily inhabiting marine subtidal, warm estuarine, and marine pelagic waters.[24] It is also found in mangrove swamps, and prefers shallow waters, especially near salty bays and beaches.[24] It avoids the open sea,[1] seldom venturing more than 20 miles from the coast.[19] Some immature birds may stray to inland freshwater lakes. Its range may also overlap with the Peruvian pelican in some areas along the Pacific coast of South America. It roosts on rocks, water, rocky cliffs, piers, jetties, sand beaches, and mudflats.[24]

Migration
Most brown pelican populations are resident (nonmigratory) and dispersive (species moving from its birth site to its breeding site, or its breeding site to another breeding site), although some migration is observed, especially in the northern areas of its range, but these movements are often erratic, depending on local conditions. Southwards, they are vagrants (found outside its usual range) in Tierra del Fuego. They have been recorded off the eastern coast of Brazil, in Alagoas. Rare inland vagrants, generally caused by hurricanes or El Niño phenomena, have been reported from the Colombian Andes. They were first recorded in July 2009 at the Interandean Valley where they remained for at least 161 days. There are four records far inland in Amazônia Legal along the Amazon River and its tributaries.[5]

Behavior
The brown pelican is a very gregarious bird; it lives in flocks of both sexes throughout the year.[25] In level flight, brown pelicans fly in groups, with their heads held back on their shoulders and their bills resting on their folded necks.[26] They may fly in a V formation, but usually in regular lines or single file, often low over the water's surface.[27] To exclude water from the nasal passage, they have narrower internal regions of the nostrils.[28]

Diving
The brown pelican is a piscivore, primarily feeding on fish.[29] Menhaden may account for 90% of its diet,[30] and the anchovy supply is particularly important to the brown pelican's nesting success.[31] Other fish preyed on with some regularity includes pigfish, pinfish, herring, sheepshead, silversides, mullets, sardines, and minnows. Non-fish prey includes crustaceans, especially prawns,[32][33] and it occasionally feeds on amphibians and the eggs and nestlings of birds (egrets, common murres and its own species).[34][35]

As the brown pelican flies at a maximum height of 18 to 21 m (60 to 70 ft) above the ocean, it can spot schools of fish while flying.[32] When foraging, it dives bill-first like a kingfisher,[36] often submerging completely below the surface momentarily as it snaps up prey.[37] Upon surfacing, it spills the water from its throat pouch before swallowing its catch.[37] Only the Peruvian pelican shares this active foraging style (although that species never dives from such a great height[20]), while other pelicans forage more inactively by scooping up corralled fish while swimming on the water surface. It is an occasional target of kleptoparasitism by other fish-eating birds such as gulls, skuas, and frigatebirds.[38] They are capable of drinking saline water due to the high capacity of its salt glands to excrete salt.[39]

An adult brown pelican with a chick on a nest on Smith Island, Chesapeake Bay, Maryland, USA

Juvenile brown pelican in flight, Bodega Head, California
The brown pelican is a monogamous breeder within a breeding season, but does not pair for life.[40] Nesting season peaks during March and April.[41] The male chooses a nesting site and performs a display of head movements to attract a female.[18] At the proposed nest site, major courtship displays such as head swaying, bowing, turning, and upright (standing on its legs without any support) are performed by both the sexes. They may also be accompanied by low raaa calls.[40]

Once a pair forms a bond, overt communication between them is minimal. It is a colonial species, with some colonies maintained for many years. Probably owing to disturbance, tick infestation, or alteration in food supply, colonies frequently shift.[5] It nests in secluded area, often on islands, vegetated spots among sand dunes, thickets of shrubs and trees, and in mangroves,[16] although sometimes on cliffs, and less often in bushes or small trees.[1] Nesting territories are clumped, as individual territories may be at a distance of just 1 m (3.3 ft) from each other.[40] They are usually built by the female from reeds, leaves, pebbles, and sticks,[42] and consist of feather-lined impressions protected with a 10 to 25 cm (3.9 to 9.8 in) rim of soil and debris.[6] They are usually found 0.9 to 3 m (3 to 10 ft) above the ground.[16] Renesting may occur if eggs are lost from the nest early in the breeding season.[40]

The parents regurgitate predigested food for the young to feed upon until they reach their fledging stage.[44] After about 35 days, the young venture out of the nest by walking.[6] The young start flying about 71 to 88 days after hatching.[43] The adults remain with them until some time afterwards and continue to feed them.[16] In the 8- to 10-month period during which they are cared for, the nestling pelicans are fed by regurgitated, partially digested food of around 70 kg (150 lb) of fish.[45] The young reach sexual maturity (and full adult plumage) at anywhere from three to five years of age.[46] A brown pelican has been recorded to have lived for over 31 years in captivity.[5]

A Brown Pelican visits the Huntington Beach, CA pier.
Predation is occasional at colonies, and predators of eggs and young (usually small nestlings are threatened but also occasionally up to fledgling size depending on the size of the predator) can include gulls, raptors (especially bald eagles), alligators, vultures, fish crows, and corvids.[47][48][49][50][51] Predation is likely reduced if the colony is on an island. Predation on adult brown pelicans is rarely reported, but cases where they have fallen prey to bald eagles have been reported. Also, South American sea lions and unidentified large sharks have been observed to prey on adult brown pelicans by seizing them from beneath while the birds are sitting on ocean waters.[52][53] The invasive red imported fire ant[54] is known to prey on hatchlings.[55] Like all pelicans, brown pelicans are highly sensitive to disturbances by humans (including tourists or fishermen) at their nests, and may even abandon their nests.[56] Due to their size, non-nesting adults are rarely predated.[6] Brown pelicans have several parasitic worms such as Petagiger, Echinochasmus, Phagicola longus, Mesostephanus appendiculatoides, Contracaecum multipapillatum, and Contracaecum bioccai, from its prey diet of black mullets, white mullets, and other fish species.[47]

Relationship with humans
The brown pelican is now a staple of crowded coastal regions and is tolerated to varying degrees by fishermen and boaters. In the early twentieth century, hunting was a major cause of its death, and people still hunt adults for their feathers and collect eggs on the Caribbean coasts, in Latin American, and occasionally in the United States, even though it is protected under the Migratory Bird Treaty Act of 1918.[5][19]

In the 1993 film The Pelican Brief, based on the novel of the same name by John Grisham, a legal brief speculates that the assassins of two supreme court justices were motivated by a desire to drill for oil on a Louisiana marshland that was a habitat of the endangered brown pelican. In the same year, Jurassic Park showed a flock of Brown pelicans at the end of the film. In 1998, American conductor David Woodard performed a requiem for a California brown pelican on the seaward limit of the berm of a beach where the animal had fallen.[63] In the 2003 Disney/Pixar film Finding Nemo, a brown pelican (voiced by Geoffrey Rush in an Australian accent) was illustrated as a friendly, virtuous talking character named Nigel.[64][a]

Aerial view of the Pelican Island National Wildlife Refuge
Since 1988, the brown pelican has been rated as least concern on the IUCN Red List of Endangered species based on its large range—greater than 20,000 km2 (7700 mi2)—and an increasing population trend.[1] The population size is also well beyond the threshold for vulnerable species.[1] The nominate race population is thought to number at least 290,000 in the West Indies,[5] and 650,000 globally.[67] In 1903, Theodore Roosevelt set aside Pelican Island, now known as Pelican Island National Wildlife Refuge, to solely protect the brown pelican from hunters.[68]

Starting in the 1940s with the invention and extensive use of pesticides such as DDT, the brown pelican population had drastically declined due to a lack of breeding success. By the 1960s, it had almost disappeared along the Gulf Coast and, in southern California, it had suffered almost total reproductive failure, due to DDT usage in the United States.[19] The brown pelican was listed under the United States Endangered Species Act from 1970 to 2009.[69] A research group from the University of Tampa, headed by Ralph Schreiber, conducted research in Tampa Bay, and found that DDT caused the pelican eggshells to be too thin to support the embryo to maturity.[49] In 1972, the United States Environmental Protection Agency (USEPA) banned DDT usage in the United States and limited the use of other pesticides. There has been a decline in chemical contaminant levels in brown pelican eggs since then, and a corresponding increase in its nesting success.[19] It became extinct in 1963 in Louisiana.[5] Between 1968 and 1980, the Louisiana Department of Wildlife and Fisheries’ reintroduction program re-established the brown pelican, and its population numbers in California and Texas were restored due to improved reproduction and natural recolonization of the species. By 1985, its population in the eastern United States, including Florida, Georgia, South Carolina, Alabama, and northward along the Atlantic Coast, had recovered and the species was removed from the Endangered Species List.[19] Its population has grown by about 68% per decade over a period of 40 years in North America, and this trend appears to be continuing.[5] It is still listed as endangered in the Pacific Coast region of its range and in the southern and central United States. Although the United States Gulf Coast populations in Louisiana and Texas are still listed as endangered, they were recently estimated at about 12,000 breeding pairs.[19]

wikipedia
Created by Mischa95 Published 7 May 2020
Why this advertisement?

Brown pelicans are so appealing! We were visiting in the Florida Keys years ago and a few roosted in the tree near our house. When they landed, the branches, which were very slim, barely moved at all. They look big, but must hardly weigh anything at all.

I learn so much from the information you post for each bird. This bio was very interesting and am glad they have been brought back from the brink of extinction. Thanks for the info, Miriam. dj