How My Cat Sees The Tree 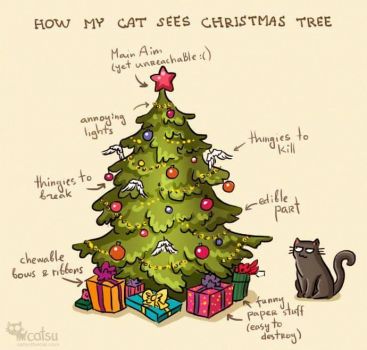 I think they are in it for the long haul they complete each other...

I actually love that video and have sent it to a couple of people....sorry pasta....but it made me laugh!

No unfortunately on Mr. side and we were unable to attend... but they sent the video and it is so cute.

I was trying to place him....but don't recollect him...so not from our family tree I take it.

THe sugar plum dance?? Cute ... I saw another one of dads dancing but it was not a christmas song... Enjoyed this one

He and his wife are very sweet people.. He moved away for a while to pastor a church but it wasnt the way they were told it was going to be so they moved back for now...

I watched it and laughed...he was very dynamic in his dancing and she was a great sport :0)
If you want another laugh...look this one up..
These were a group of Dads that got together and did this.

O&A try copying and pasting the link in the browser field at the top of the browser to see if you can get them to load.

Werent thy cute... I didnt know he could dance like that....

I saw it without a problem.

I went to it but maybe because i have it saved on here... to bad they are so cute..

Did you copy and paste it on google ???

www.lajsiab.com/TlNGUHg0MjNsRWMx This is how I first heard the song... This will bring up a video of my nephews wedding .. He is a very funny young man an i love watching them in this.. So I dont care what others do about this.., He was a youth pastor at the time.....

that doesn't sound good O&A, maybe we should just leave it alone and hope it doesen't come up till next year!!!

I try and Try

I feel your pain, please make it stop, you end all the good stuff why can't you end the bad stuff?????? HAPPY BIRTHDAY!!! to baby sid!!!

Oh My Goodness...I was looking for Happy Birthday tunes for Baby Sis...and WHAT did they sneak in on me?!!! What does the fox say....I just cannot get away from it!!!!

I just can't really stomach going back to that clip again!!

we could go in for what the other animals say.... like the elephants says toot...

Im still with tea no thanks!!!

LOLLLLLLLLL I still love it... I should send you the you tube of our nephews wedding they acted it out ...that is how I first learned it ...It was so cute....

And now he is having traumatic memory issues...he stops hops around and sings a verse or two...Oh the humanity!!

Only because I felt compelled to watch that sickly, sickly video!!

LOLLLLL and he knows alll the words !!!!!

We Love it
Ylvis - The Fox (What Does The Fox Say?) [Official music ...
https://www.youtube.com/watch?v=jofNR_WkoCE

Imagine if you will about 4 young ones at work that play the dadgum song over and over...then your beloved niece nephew sister in law and brother in law come in from San Diego....
Have to show me the cutest video...of course none of them in the same room except the bro in law...they all played the song for me ....later that evening ...bro in law says hey tea....and then plays the song.
I cannot imagine the joy in it...as it is the silliest thing ever....but she is right....when the kid heard it...she was over the moon.

mrsmike2 just now Remove
:) Thanks genevap glad you enjoyed it

Ohhh Sid put you up to that... Wondered why you were talking about a fox...LOLLLLLLLLLLLLLLLLLL
I thought you had been ino the egg nog ( which now we know you dont like)
well my litle Sid got my daughter a stuffed Fox for Christmas, because she and her share a love of foxes,,,,,,,well this little guy sang and jumped around.. Can you guess what he sang????
"What does the Fox Say" I love this song and so does the kid...but.... Sid T hates the song so we were delighted with it a played it over and over and sang with it an watched it jump all around....as to why she dont like it some unfortunate thing were she was stuck somewhere and had to listen to it over an over ...she will have share that story...but it was a triple hoot for me.. was cute, loved the song, and the look opn her face when it sang the song for the first time....twas a kodak moment ...if only I knew I would of had my camera out and waiting....you my friend would of neededa depends,, it was that funny!!!

This is so real, just like you are reading the cat's mind. I love it! And, I love cats. They can be so funny.

Shish another exam, very cute, once you got your grade back!!! Whats up with the fox?