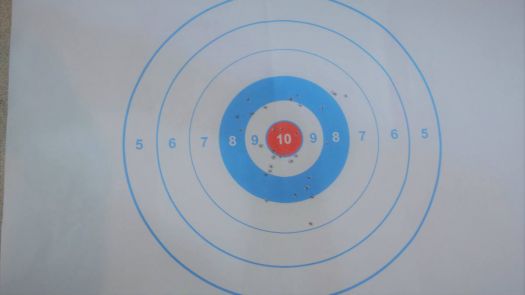 Not too bad, right?!
Created by CMatisse Published 17 September 2017
Why this advertisement?

You're welcome CMatisse! I've taught over 5,000 people how to shoot and handle guns safely. Some of my students have shot for the U.S. in the Olympics. And I've been a competition shooter since 1965. I've won several championship events, including a World Championship in combat pistol shooting. However when I started I took the basic NRA course and then had advanced instruction for 7 years, but I was never any better than your target in this puzzle.

Finally my coach asked me a question. It was something I'd heard HUNDREDS of times during those 7 years, but it had NEVER SUNK IN! Suddenly I had the Lightbulb-Over-My-Head moment. That very evening my groups shrunk to the red 10-ring bullseye on this target. After that one moment of revelation my hits in the 7- and 8-rings just disappeared and it's been all 9s and 10s since then, mostly 10s.

What's the "secret" that they told you in your first lesson, but it didn't sink in? It can be said two ways, positively and negatively. I'll start with the negative:

You never look at the target!

And now the positive:

You keep your eye ON THE GUN!

Here's why. Once the target is taped up or stapled up it doesn't move. It can't.

When you hold a gun YOU CAN NEVER HOLD IT STILL.

Your instructor told you, "Look at the front sight. Line it up with the rear sight, and aim at the target." You (all beginners) automatically focused on the "at the target" words because you've been throwing things all your life and you know you can't hit a target unless you're looking at it. You can't make a toss into the wastebasket by looking at the wadded up paper in your hand, you have to look at the wastebasket. You can’t throw a football to a receiver unless you’re looking at the receiver. Wouldn’t a quarterback look ridiculous if he had his head turned toward his throwing hand the whole time?

Shooting is JUST THE OPPOSITE! You *have to* look at the gun. How else are you going to know where it's aimed when you pull the trigger? Oh sure, it'll be pointed in the direction of the target, so you'll fire 30 or 40 shots like you did and you'll get a big pattern like this. But why settle for a lousy result like this when it's so easy to put all your shots in the red?

Shooting is easy. You just line up the gun right by looking no further than the sight on the end of the barrel, and wiggle your trigger finger. Two easy things.

You've been LOOKING AT THE TARGET all your life. It'll take discipline and practice to make yourself look at the front sight. Not down range. Not at the bullseye. At the sight.

Here's a hint to keep in mind while you're aiming. If you can see the scoring rings on the target nice and sharp and clear it's because YOU'RE LOOKING AT THE TARGET! When you're looking at the target you're NOT looking at the gun. So the gun is moving while you're not watching it, and when you squeeze the trigger and fire the gun you don't have any idea if that bullet is going to hit high or low or left or right. Only the bullet hole will tell you where the gun was aimed when it went off.

It's more fun to know where the bullet hole is going to appear before you fire!

Shooting coaches universally teach stance, grip, breathing, posture and on and on. All those things distract you. When's the last time you died from not breathing, or dropped something as important as a loaded gun, or fell down while standing still. Never. So don't clutter up your shooting with unimportant details. Concentrate on 1) focusing your eye on the front sight. Once you have a good sight picture just 2) squeeze the trigger smoothly so you don't jerk the gun out of alignment as you fire it.

If you concentrate on those TWO THINGS ABOVE ALL ELSE there's no reason we shouldn't be seeing you on the Olympic Shooting Team!

Thank you, racoonstar and patsquire, for your advice. I did have my first class. This was my first time ever shooting a gun. I thought it was pretty good! I will take more practice and another lesson - all before I purchase. I have everything to learn. Cheers!

I'm with patsquire on this, especially if you just purchased a gun.

When I visit my sister near Las Vegas, I go to one of the shooting ranges there, rent a few guns, and blast away! The last time I was there, the employee who was monitoring my shooting suggested some changes to my grip on the pistol I was shooting (a Glock 17).
Just a couple of minor changes to my grip made a HUGE difference in my accuracy.

With a few corrections, I believe all of your shots could be in the 9 ring, with most in the 10.

No offense, beginner, but you should take a shooting lesson and find out how much fun accurate shooting can be! Anyone who can wiggle a finger can pull a trigger. Since that's all the physical effort it takes, people who believe shooting is 1% physical and 99% mental are right. OK, maybe it's 2% and 98% but a shooting coach can TEACH YOU HOW to hit the bullseye every time. You do want to be better than "not too bad" don't you?