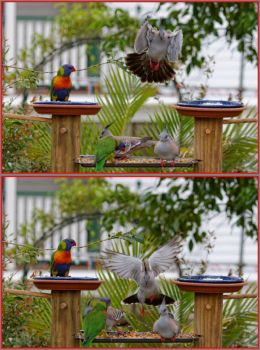 ....to the bird feeder in our back garden.
Taken on Monday.

Thanks Floyd & Beekay - I really appreciate your comments:)))

Love your photos Rob! Nice seeing them with the wings and tails fanned out. So pretty☺

Thanks Patti, Sandy, smllpkg, Florrie, snooker, Allie and Dave - I really appreciate all the comments:)))

Actually no one seems to worried or impressed by its coming. Thats neat how the first foot is coming down for landing.

Part of the landing gear is down anyway. Great shots!

Wonderful photos! They made me smile! Thanks, Robyn!

Thanks Janet - Jeremy did well on his first goes at catching them 'in flight'!!

Great pictures!!! Thanks Rob.
I think Janet is right. Your local lorikeet does not look all that impressed !!

Wonderful collage thanks Rob and Jeremy. Fabulous pics! Yes I love the pink legs and then one pink foot down! The Lorikeet higher up is definitely thinking "That's too many pigeons now!" Our will not share with anyone either, and they boss the bigger birds. Thanks and hugs, janet

Beautiful collage and I love it :) Thanks Rob and Jeremy!

LOL!! They soon hunt the poor Pigeons off Shirley:)))) even though there's plenty to go around!!Thanks!!

Thanks songbirdj - I'll pass the compliments along!!

Great shot, the Lorikeets seem to be more accepting in this picture, not so graceful landing :))) our Crested Pigeon :))) love it though, Thanks, Rob and Jeremy

2 great shots! I've never seen pigeons so colourful! In Canada they are grey and white.