The smaller thing get, the bigger they get. 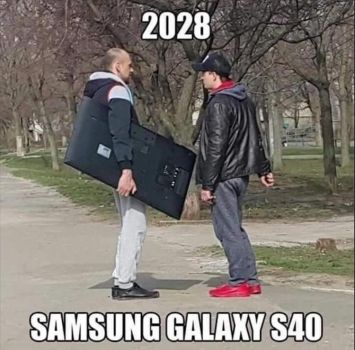 Garlic does not deter Aussies. She is able to sneak down on you from above, and break the screen before you even notice she is there, upside down, in front of you. Breaking the screen is not difficult, but stealing the phone? That still remains a rather difficult task.

But Hoff... if these phones are much harder than steel, how is it Ms_Maddy is an expert at smashing mobi screens? Does Ms_Maddy have super human powers? Should I be wearing garlic around my neck?

The benefit of these phone, is they are MUCH harder to steal.

OMG! ROTFLMAO Thankfully no coffee is near my lips... My face hurts now.

I don't know why red shoes would be trying to make a deal. He could pick a bushel of Spam off of the Spam trees right behind him

I think 'red shoes' is trying to make a deal. they have been standing there for quite some time now... seems suspicious... :D

I will smash yours for free! Can always use more practice.

I am an expert in smashing mobi screens.

They need to sell a line of phones that emit a foul smell when it falls out of my sons pocket. He would know when he had forgotten something and the stench would make him more cautious in the future. Since he’s on his own plan, it’s his baby now.....

Why is it, you see a white guy wearing a hoodie, and all of a sudden he's Jack the Ripper? Everyone knows a large 55" flat screen cell phone is a chick magnet. The only better chick magnet is a cute little puppy. When he gets trampled by a herd of hungry "Housewives of New Jersey" fans, he will be regretting he ever took his big screen cell phone for a walk...

Now the question to the above image. Was that a recent purchase flat screen or five finger discount at some unsuspecting neighbors home? Will be really hard to take off running, those things are not light weight! maybe he just wanted to take his tv out for a walk? So walk normal and casual and no one will notice. Except the guy in the red shoes asking the question of the day... hey buddy, where did you get that really cool tv? Anymore where that came from?

When my phone got lost... OK, I ran it over with my car... the Static Phone Company replaced it with a Galaxy J7. Yeah, I never heard of a Galaxy J7 either, but I found out the J7 was designed by their lead engineer, Pepé Le Pew and features a security app. If someone tries to steal your J7, the phone will emit a totally disgusting smell and the thief falls to the ground and twitches like a fish out of water. The thief is then given a choice, return the phone and pay an outrageous fine, or be wrapped up in a box and sent to the Spam manufacturing plant. Now you know why you sometimes hear static when you open a can of Spam