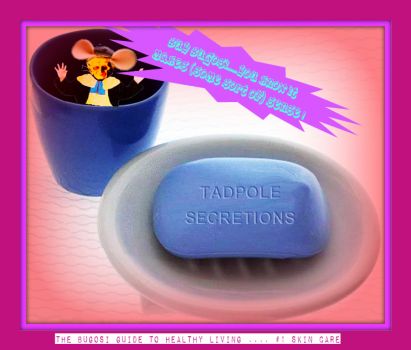 As a nearly-highly respected and adored world-leader, it is obviously important for me to look my best in public. Many a time (more than once) I have been asked how I keep my skin looking so fresh and young - well here, dear followers, is the not-so-secret secret......
It is all down to a refreshing scrub with all-natural, homemade, TADPOLE SECRETIONS SOAP!
Trust no imitations! The authentic Bonga-Bongan Tadpole Secretions Soap is easily identifiable by its unique oily texture, and its soothing stagnant pond aroma......
And remember, children - ALWAYS WASH BEHIND THE EARS!
Created by lelabugosi Published 19 January 2016
Why this advertisement?

I haven't seen Jignut or Wicca in a while. I hope they're OK.

Wicca was at my house for a visit last week. All my curtains are now in the laundry.

If tadpolesoap is good against covid-19 why not tadpolewine.... ? What WAS the name of the crow that pooped in the curtains??

Well, they ARE delicious!

Oh no, this reminds me of that video my uncle forwarded me of a Chinese toddler slurping up live tadpoles

Hmmmmm..... maybe that tadpole secretions soap might help with Covid-19.

Just did a quick perusal of 139 comments (minus Mr. Christmas Caroll's) what fun we had!!! Now, besides missing "freedom"...I'm missing laughter...another five gallons of Tadpole wine please...hold the soap... :(((

And soap for you too, also, as well, raincoat-infusion!

Wishing you all well and stay safe ♥

Than you for the soap, I hear it tastes great, or was that the wine??
Oh well I will find out..

Know you are in our thoughts, as is the rest of the world dealing with this. The traffic here is non-existent. We are currently shopping for 2 weeks at a time. The mail will be picked up once a week at the post office. Living in a rural area does help. As of 8 tonight, we are restricted in our movements.
We look to Bonga-Bonga for laughter and solutions and are happy to offer them to you in return.
Stay strong.

All I have to trade are rainbows, what can I get with that?

Tom-minus ...... Jigidi does indeed get murkier by the day . Wishing you well!

mostseniorofallseniors ....... I will gladly trade with you, thank you!

My thoughts to you, too, dear sweet lela. Take care, keep safe, keep well. We all depend on your steady hand to steer us through the murky waters of Jigidi!! ❤️⁀‿⁀❤️

Thank you both! Yes, we are fine - I'm just going out to shop a couple of times a week. Really sad to see the once-bustling streets so empty now.
Hope are both alright as well - am sending you each a box of our all-natural, homemade, TADPOLE SECRETIONS SOAP!

Be careful down there both of you!!

Ditto...and I think about you when the news starts quoting stats in your area. ❤️❤️❤️

Hoping that you and your sweetie are staying safe and keeping your spirits up.

A little enjoyment for all! :)

Just deleted it as promised.

THANKS for giving me a chance to see it too!!! Hugs...

Yes Faye, ye who sends me the wonderful videos!!!
Thanks to Faye for sending it to me in email a while back! :)

Missed the posting...was that THE Randy Rainbow, Suzy? ;)))

Glad you caught it, Mr.Biscuit. Amerikka is the new North Korea!

Glad you both enjoyed the link. I deleted it. Don't want to upset TPTB.

THANK YOU, pumpkinhead!!! I'd never heard of Randy Rainbow before, and now I'm a fan!

Thanks, punkin - that was spot-on!

This definitely is of public interest; I mean, where would we be without it!! ;)))

I do try my best, when it comes to important matters of public interest..........

Mat, you need to get off that blue "soap!"

Same here only mine went out west, met up with a cowboy and stared an Aunt Farm.

You guys are weird.

My Aunt used to call me Pet

OK Hanne, I won't come after him ..... her ..... it. But keep a sharp watch, don't let him ..... her ..... it escape. An escaped PET Giant White Space Worm is just as dangerous as any of them! (Remember, there are huge alligators lurking in the sewers of all big cities everywhere, which used to be pets that got flushed down people's toilets.)

All those who PAID FOR but didn't GET their salt shakers last time, hee-hee, DROP DEAD!

But why kill them? They are SO sweet - and easy to tame...

Plus which, furthermore, in addition, also as well - Mr.Squirtz is COMPLETELY INSANE!

psquirt is somewhat behind the times! Most manufacturers now eliminate the "Made in China" from their label and would only put "Distributed by S&B salt shakers, Alabama, USA " in the fine print so people feel that they are actually purchasing a quality product...tsk tsk!

If the Giant White Space Worms are indeed making a reappearance in GREATER NUMBERS than ever before DON’T BE CAUGHT WITHOUT A SALT SHAKER! Everybody beware, be warned, carry a shaker of salt with you at all times!

I recommend the reliable high-volume S&B salt shaker. It's the BEST for all-around defensive salt shaking.

Not available in stores! You must call this free S&B salt shaker hotline: 1-800-555-getlucky. Only three easy payments of $19.99, payable by credit card with your Social Security Number for verification. Call now! ***BUT WAIT!*** Call right away and get TWO S&B SALT SHAKERS for the price of ONE! That's right, TWO of these highly effective, quick-defense salt shakers for just three easy payments of $19.99!

When the public weal is at stake, civic minded profiteers, er, I mean citizens, must be willing to make certain sacrifices. Other "services" usually available from my 1-800-555-getlucky hot line are temporarily suspended while I cash in on this emergency. I mean, while I respond to the need for public safety and self defense from this terrible threat!!!

AND IT IS A TERRIBLE THREAT, PEOPLE! CALL NOW!

I think we should join Mat, make the cookies and eat the figs... and feed the Giant White Space Worms with delicious cookies... would be fun...

I think that is where everyone has being going so very wrong, about the Giant White Space Worms.......They are being mercilessly sliced up by desperate defenders of their dominions........but this does not kill them - instead, they multiply and multiply......
We are in fact, ipso factotum, AIDING IN THEIR REPRODUCTION!!

No bother at all, Cookster. A couple of bucks at the grocery store.

I never wondered how they got the fig filling in the cookie, oldf*rt, but when I saw the video I was fascinated at the sheer inventiveness of it. My description does sound funny, I grant, but the reality is pretty cool. Lelabug was closest of anybody with his underwater theory! They really do flow together! And it looks like they're growing endlessly, like a Giant White Space Worm, until they get to the cutters............Hmmmmmmm, I wonder if cutting a GWSW into segments would kill it, or just give rise to more GWSWs growing endlessly from the segments!?!

I see, sort of, I think and thank you, but it all sounds like such a bother. Just eat the figs while you make some cookies

Well I think they grow underwater.......

Imagine a pipe with the end squashed into a flat oval. Now imagine that it has a flat oval inner ring. Cookie dough can be forced to flow through the pipe and emerge as a flat oval ring of dough. Now imagine that there is a separate pipe, squashed into a flat oval, which is a little smaller than the inner ring of the dough extruder. Imagine that it is right there, surrounded by the dough extruder, and it has delicious, sweet fig filling coming out of it at exactly the same rate as the cookie dough.

The cookie dough and the fig filling merge into an harmonious whole which is called a Fig Newton. The long, continuous stream of filled dough travels on a moving conveyor and is cut into cookie-size pieces, then baked in an oven.

VOILA! Fig Newtons! Google those two words for a look at one of the most iconic cookies in America. They're chewy and delicious!

(I saw a fascinating video about the manufacturing process just a week or two ago.)

I think they are an apple...or maybe a pomegranate???

I like to eat figs, but what are newtons?

How about some nice fig newtons? Mmmmmmm.

Who? Me? I'm no expert...I'm just trying to earn a living here. psquirt's 40% sounded so good I thought I'd give it a try...mind you, payment in cookies isn't quite what I had in mind!

I think that any bubble dancer related questions need to be addressed to the expert on the subject - precious-pebble!

The Boy Who Invented the Bubble Gun - Paul Gallico (1974)

Master Henry just sold me a Bar, and told me to eat it all in one go......is that right?

Aw gee...I already have the band rehearsing "I'm Forever Blowing Bubbles" for your number...and we have the photographer lined up...and the audience. What a disappointment!

As it turns out, I blew all my money on the Bar but I needed more.. so I did the normal thing and started selling Bar to others to support my habit. It was not long before I got busted and agreed to rehab. I am told they have an opening at the doll house.

A bubble dancer is similar to a fan dancer...with less coverage...

Well, at least Mr.Biscuit can blow his own bubbles and entertain the little ones......In fact, he could make a career of it as a professional bubble-blower......

It's a shock to see the Cookster so completely jonesed so quickly. I've been warning about the addictive power of the tadpole products foisted on the world by the Bugosi clan for years. Years! I say! But even I never suspected that this d*mn Blue Bar soap would be so hyper-addictive. Of course, maybe it's not so bad if WASHED WITH but who expected that anybody would ever EAT IT?!?

HUH? You ATE IT Cookster? What were you thinking???

Nice of you to crawl out from under your rock Roger. WHERE'S MY 40%??? As George C. Scott said to Fast Eddie in The Hustler, "YOU OWE ME MONEY!"

Confusion is a national malady in Bonga Bonga...Mr. Biscuit will help you with your soap, incredibly-aged...and he's probably in your time zone so he'll be right over...just leave it in a plain brown wrapper on your front steps!