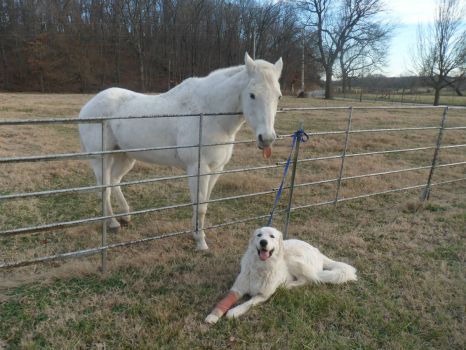 Big white horse and dog
Created by Graywolf Published 23 December 2018
Why this advertisement?

A good friend who lives in Seattle is on her third GP... she’d never had any kind of dog but decided she wanted one. Her first one was a rescue, but I think perhaps Bella rescued her, not the other way around. One of the other two was also rescue, and my friend worked a GP rescue society for a couple of years. Sounds as though you’d be a natural for such work, saladlover.

I just don't understand how people can dump animals out like they are trash, it saddens me so much...takes a heartless person to do such a thing...I can tell he is a sweetie, thank you so much for taking him in and giving him a fur ever home...Hope Bo's leg heals quickly...Pyrenees I was talking about we didn't know his name, he lived two doors up from us but was over all the time, we let him in anytime he wanted too, all he did was come to our storm door and tap it with his paw and when he wanted out he did the same...We took him to the vet also when he got shot but there was too much damage, he got shot in the neck area, broke bone at his leg and they were going to have to amputate, broke jaw and they said no telling what damage inside and they couldn't guarantee us of anything...it was so hard...They are very intelligent dogs, so loving...God Bless you for taking care of him...

Bo was a "dumped" dog who roamed the neighborhood. After a month or so he chose our place. He got slightly hit by a vehicle. The bones are cracked. He can slip a collar or halter faster than I can put one on. He has to be completely penned for now so the cast does not get wet. I walk him twice a day. He is a sweetie.

Such a beautiful horse and dog, Great Pyrenees...My neighbors had a Pyrenees which they could have cared less about him, he was such a sweet dog, so playful, loving, unfortunately he got shot and didn't make it, only 3 yrs old...they wouldn't even take him to the vet to try to save him but we loved him like he was ours in which we had taken him to the vet once earlier this year from other injuries and got his shots, paid for his meds, food etc...they didn't even shed a tear in losing him but man I cried like a baby, he was like my baby...This dog reminds me of him so much...is his leg injured or bandaged???