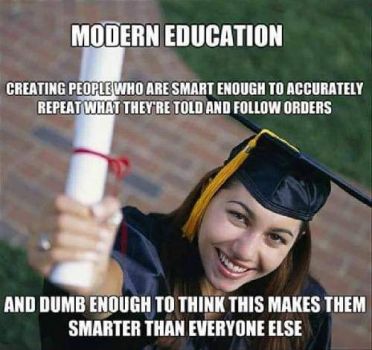 Jerry, I meant to say "You needed to sort OUT where you belonged", but I think you understood that.

Mazy, I too know a few who are brilliant, downright savant, but not in all facets of life.

I think it's vital to be self-aware like that. I can see how that would have been a negative situation indeed! I felt a bit like that when I went back to finish my 3rd and 4th year at Uni, having lived and travelled in Australia, NZ, the UK, and Europe. I was 26 or something with a bunch of 20-yr-olds who'd never left school since kindergarten (and in many cases still lived at home and had never had a job). Big gap at that age. I've no doubt I got more out of Uni for having had some life experience, and my grades reflected that. I've always maintained that it should be mandatory for people to take a gap year and travel, see what the world is like, before starting Uni.

I know a lot of brilliant people who've never been able to overcome dyslexia but have made their talents and strengths work for them. I for one haven't figured out how to do that for myself yet... always feel like I fall through the cracks despite having been top of my class most of the time since high school (this included aviation as well as Uni so not just academia). I think it's 'cause I get bored unless I'm either learning or challenged constantly.

Thanks, Ellen. I was at the top of my game at the railroad yard as well which is why I stayed as long as I did.

WELL done, Jerry! You just needed to sort of where you belonged.

My experience with higher education was very negative. I graduated high school near the bottom of my class so I was not good in an academic environment. Went into the military right out of high school and finished 3rd in a class of around 75 in basic radio operator school and later on, 1st in a class of 15 in advanced radio operator school and finally 6th in a class of around 70 in Officer Candidate School. Then I made the mistake of successfully applying for DeVry and the Coast Guard sent me there for two years. After a good start, I ended up leaving at the end of the 2 years on academic probation and no Associates Degree. The student body was made up almost entirely of teens fresh out of high school and I was 35 years old. Despite all the semesters of repeating Calculus over and over, I can not tell you the first thing about Calculus today. The administration of the curriculum just did not fit for a 35-year-old. I do not feel like I failed the school, I feel like the school failed me. Lesson learned - stay away from things you are not good at. I did not do well in high school and I should have learned from that. Later in life, that new philosophy would serve me well. When I ended up with the Sheriff's Office as a civilian jailer, I put in for the police academy twice but it never came through. It became clear to me, after watching what goes on in law enforcement that I would have made a lousy deputy. Capitalizing on things I was good at, I ended up managing the inmate trust fund and later on also took on the responsibility of supply officer. This was with a jail with 800 inmates and handling nearly $700,000 in inmate funds per year. When I retired from the county, I was the highest paid civilian employee in the department and making more than half the deputies.

Interesting. My entire experience of University, at two different Universities, at two different points in my life, was never about jumping through hoops to wave a piece of paper at the end and crow. I'm smarter than the rest of you!

It was entirely about reading, listening, (and something more fundamental, but I will get to that) and engaging with other students and our professor in sharing stories / ideas / concepts / interpretations of events, integrating the information we gleaned from that, looking up our own sources for citations to back up our own hypotheses based upon our experience and the collective experience we'd been privy to (whether those of our fellow students, or our grandparents from different countries and cultures, etc), including first person and third person accounts of history... I could go on.

Ultimately the aim was to then take all of this information, chuck it in the blender (the brain), absorb it and synthesize it and stretch our blenders - I mean, brains - to make something out of it all. Something useful. If nothing more, than to have the skills to question the status quo and doubt the motives of those in power, and to think for ourselves, rather than to buy into what we're told.

I did finish at University before there was much more than basic email on line. So maybe things have changed. I doubt it.

Sounds to me like you are talking about the military (do as you're told and question nothing) rather than academia. Because nothing I learned in University was about regurgitating facts (that was high school history) and as for following orders? University definitely doesn't breed that.

So maybe you are talking about American higher education? because it's not like that in any of the other countries I've lived in.

The main thing University teaches is how to think for oneself. At least in the countries I've lived in.

I have met a lot of educated idiots in my day.

Yes, then they're saddled with a humongous debt that they get to spend the rest of their lives repaying...

A piece of paper does not make a person smart! Good one, truck!