Only a true jackass would take a Sheltie Selfie. 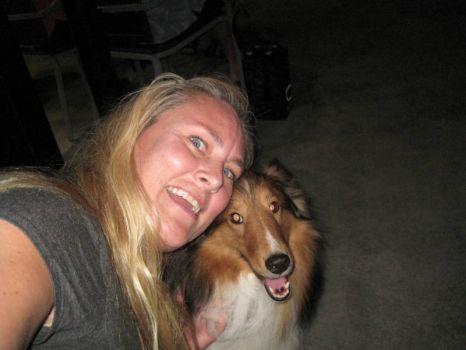 A friend I met at work posed for this one with me.

Neither of us were into duck face, so we just smiled 'cause how great is a Sheltie Selfie?
Created by Mazy Published 6 July 2019
Why this advertisement?

Yes I know you’re the beauty on the left. I said what I meant, and meant what I said. Farts rhymed with smart. :-)

whupps (or is that whoopee?) I missed the fart joke thread.

How smart are farts? Are they SMRT?

Clive surely we've both known that for some time!! I mean, it takes one to know one!!

You’re a beauty Mazy, and smarter than farts. All that AND a sense of humor !!! Xxo

Ha,Ha, Mazy so we both have something in common then. I mean being naughty on jigidie. LOL!!!

I'm only trying to keep up with YOU!!

Ha, Ha, Mazy nice to see you back naughty you.

no boogers neither. What do you take me for? (good thing you can't see my ear hairs, my ear hairs are too long!)

Pleased you enjoyed it Juba, still waiting for Mazy's reply I hope she is not hiding as she is quite straight forward at times. LOL!!!

Mazy I had to enlarge the puzzle after Juba's comment to see if you had hair in your nose, but it was all clear such a disappointment. LOL!!!

Joe, ANYTHING in Klingon sounds like 'a few choice words'!

Not fluent in Klingon, but I do know a few choice words.....LOL

except my nose isn't crinkled...! and I prefer very understated earrings, studs but usually nothing at all.

I would have said more Bejoran than Klingon. Nowhere near as complicated as a Klingon.

I know Joe but autocorrect as always thinks he's always right, even when he is NOT!! You're lucky autocorrect know it all didn't change it to say you were a Star Trek Greek. That could have gotten confusing.

A friend of mine is so fluent in Klingon that she is a pronunciation advisor for Star Trek Discovery. As a massive Star Trek geek (you gotta admit fluency in Klingon is pretty massively geeky) she was beside herself to be involved.

I Didn't really look that closely Mazy! I think it's a great picture IMHO!!! :))

well it IS one of the reasons I don't think it's a great photo!! Also my forehead looks like one of the regular alien species from Star Trek, a Roman or a Klingon. And my hair is very mussy and you can see my armpit. But the dog looks GREAT!

Not even a chuckle? It always worked on my kids. :-)

exactly. One of the reasons I'm not a huge fan of this angle.

Everyone seems to have delivered all the compliments so I’ll just say...I can see up your nose. ;-)

aw Joe, your new back-pain free self is skipping about and kicking up his heels, I can just tell! Ready to cut a rug you are.

Yes the Sheltie is adorable as are you! :))

everyone's saying such nice things about this photo, thank you all so much. I always believe I take awful pictures and this is not exactly a flattering angle or light LOL but the sheltie is adorable so I'll keep it for a while. :)

What a couple of loveys! Mazy, am I seeing that you have green eyes?

You're welcome. :D And I think Mazy has several fans now. :D

Oh wow then Mazy... I must stop now you really are amazing. No more said.
Going to bed now so nighty Night.

Oh Mazy is this really you.? Tell me it is before I say another word.
Clive.

oh - sillychick - what a delightful thing to say. Thank you. I needed that!

People who can't recognise when another mammal is smiling need to learn facial expressions!

aw, youse guys. You make me blush, and my skin is already pink enough to begin with.

Let me change that; thank you so much for the kind compliment. Everyone likes compliments and I am no exception. Mara loved being told what a good girl she was and how clever and sweet she was - and no treats even! so we all like to feel good, so thank you.

And I do tend to agree, animals are more constant and loyal than humans. Plants even more so. Jigidi pals are great because we can laugh and tease one another and poke at foibles, and then turn off the computer when we are done 'people-ing' and no one gets upset or offended or any of that dumb stuff

I just made dinner singing lime in the coconut like a lunatic (is there any other way?)

Very much a compliment from me. I would almost always rather spend time with animals than people. Present company excluded, animals are just better people as a whole than humans.

Ya got a nice set o' choppers, there, lovely lady!

I'm still an amused sarcastic jackass but I will also accept being a lovely lady, even if that is a compliment bestowed on a dog at the same time. Well, she was sweet as could be, you can tell from her delightful smile!

Both lovely ladies. And I don't compliment humans that much.

I do need new glasses but this smile is NOT the same smile as amused jackass.

Don't you recognise it's the exact same smile?

This is Mazy and Mara, she was a darling and we became fast friends almost instantly (and I didn't have any food or anything. Just simpatico). Her colouring does a lot better in this photo than mine (but for once I don't have devil-pupils).

LOL Heidi just pointed out that this avatar looks familiar... and apart from what is being looked at, even Ellen's is a precursor to this. I didn't even think about it, just thought it a fun pic to share :)

Only you could pull off going from being an amused jackass to a smiling friend of a Sheltie in the blink of an eye. Nice pic!

What is the Sheltie's name???

That's a lovely picture of you, and the dog!! LOL -- Carol

Well, there I am! with a dog. Smiles all around.

If you do not like selfies get another to take pics of you. We want to see you.

Yeah... I don't often do selfies (like mostly not) but I couldn't resist this opportunity, and the dog was so down for it, as you can see. She looks infinitely better than I.

Is that you Mazy??? You're a lot younger than I thought - nice doggy grin... the sheltie I mean =D

AW! I used to have a half-sheltie named Pedro. I miss him. Besides, Duck-face is for idiots. wonderful pic.