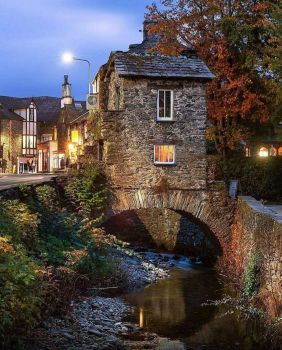 The Bridge House, Ambleside, built in the 17th century above a river to avoid paying taxes in the jurisdictions of either sides..
Created by deadeye Published 21 November 2020

Nope, wouldn't have been your Dad's shop when I was living there. I'm glad you commented on the puzzle and triggered this little trip down memory lane. I'll see you on the puzzle pages :-)

@deadeye Dad closed his shop sometime in the late 70s and moved it to Amherst, so it's not likely the shop you remember was his. A young guy...Carmen someoneorother ...opened in Millers Falls just after dad pulled up stakes.

Hey neighbor :-) I remember a barber shop in Miller's Falls and Zschau is a name I recognize as it's rather unique. My two youngest daughters were born in Greenfield and I used to do outings at the airport in Turner's Falls (very steep bank down to the river) to watch the RC planes and the parachute jumpers. It was a nice part of the world to live. It has changed A LOT since I lived there back in the late 80's and early 90's. It's cool running into someone who shared the same little spot of the world :-)

@deadeye Don't know which dark recess of my mind spat this forth, but the insurance agency was the Partridge-Zschau Insurance Agency. Hadn't thought of that in YEARS!

@deadeye Such a small world! Glad to make your acquaintance. You perhaps knew my dad's barber shop next door to the insurance agency and just across the street from Lucy's Luncheonette in (thriving?) downtown Millers Falls. I worked at Bement School (just up the street from DA) for the first couple of years out of UMass, and later for about 9 years at Greenfield Community College. The first house my wife and I bought was a Victorian in Turners Falls, on the hill overlooking the river.

That's a bullseye jerrys : I lived in Miller's Falls, worked in South Deerfield, my folks lived in Leverett, and my paternal grandparents lived in Sunderland. My father and his 3 brothers all attended Deerfield Academy. I traveled Rt. 63 on a daily basis and I know I traveled through Monague Center numerous times. I've probably seen the building which at one time housed your great-grandfather's farrier shop, though it wouldn't have stood out as anything special. I have family in the area still and the last time I was back was, I guess, about 2 years ago. How about that?

@deadeye His shop was in my hometown of Montague Center, a village off of Route 63 between Leverett and Millers Falls. He was a farrier and also produced ornamental and domestic iron goods. It was converted to a residence (can't imagine the lingering smoke smell!) sometime in the first decades of the last century. A Mrs. Burke lived in it while I was growing up. It is/was across the road from North Pond on the road out of town toward Sunderland.
I've not been back in several years although some family still live in the area including a sister who built a log cabin on part of our old farm. Like many small towns it has evolved greatly over the years since I roamed its environs.
Where did you stomp?

Love this photo of the Bridge House and information about it. I find it very interesting. Hope to hear more about it.

Hey jerrys. Interesting. I'd like to hear a little more. MA, especially Western MA, is my old stomping ground and I'm curious as to where your great-grandfather's shop was, or is-I may know it :-)

Hi Ronjazzer. Thank you for that bit of trivia. The picture caught my attention because of the building's interesting construction but it's great to know a little more about it :-)

@deadeye What a charming little house. My great-grandfather's blacksmith shop was built astride a small stream in Massachusetts. It has been a residence for as long as I can remember.

This tiny building was originally an apple store for nearby Ambleside Hall. It is claimed locally to be the smallest house in Britain, although the Quay House in Conwy in Wales is generally thought to be the smallest.