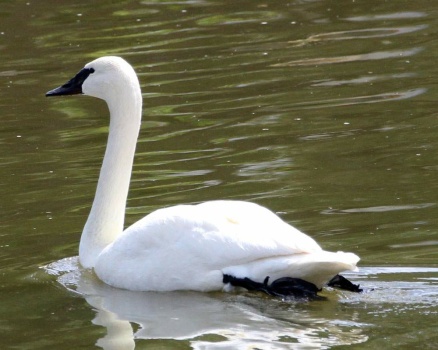 I had never been to Lake San Marcos, but a woman I see on the coastal trails I patrol told me there was a pair of black swans on a nest there so I met up with her one morning to go see them. She knew there were white swans too and we saw a pair at the far end of the lake. It's private, so we couldn't get any closer to them. While we were watching black-crowned night herons and snowy egrets gather nesting material and fly to a big tree across the street, this white swan swam out from under the bridge. I didn't see him right away, so I only got a few shots before he had his back turned to me. I did some googling when I got home and he is probably one of, or a descendant of, four trumpeter swans that were released in 2014 in memory of a local man, Ken Beall.

https://www.sandiegouniontribune.com/sdut-mating-swans-releaased-ken-beall-lake-san-marcos-2014dec05-story.html
Created by Ginni2 Published 21 May 2022
Why this advertisement?

There is a neighborhood online group called NextDoor that people use to chat with each other. Sue reads it sometimes and told me about the swans. One with a damaged wing was picked up and euthanized by Animal Control recently. Neighbors were outraged because the swan had lived in the lake with his damaged wing for some time, I'm not sure how long. Maybe a dog is attacking when they are close to the shore? I haven't heard any more.

I don't understand!! You already told me about the black swans missing chunks of their wings. I've never seen a damaged swan and I'm seeing lots of them. A black swan is smaller than our mute swans, and somewhat more meek, but evenso I wouldn't think it would allow people to hurt them, they're still big enough to defend themselves. And now you're telling me it happened to a trumpeter as well? They're huge! with a wingspan of almost three yards. I wouldn't think they would let any human come near them. But what then? Is there something there that could hurt them? The only thing I can think of is a watermill of some kind, but then my next thought is : they're not stupid, they would never get cought in it!!
So again : I really don't understand!! And it is indeed very sad!

Something bad is happening to the swans at Lake San Marcos these days. I've seen two black swans missing most of their wings and I heard the same thing happened to a white swan and another white swan, part of a mated pair, disappeared entirely. So sad!

If there were two breeding pairs introduced in 2014 I would guess there should be a lot more trumpeters in the lake by now.
They're beautiful, and even bigger than our mute swans. In fact, they're the largest swans in the world.
We don't have them here, they're American swans. But sometimes they're seen in the UK, in Suffolk and Devon.
We do have four kinds of swan but I've only ever seen mute swans and black swans. Never Bewick's swans or Whooper swans.