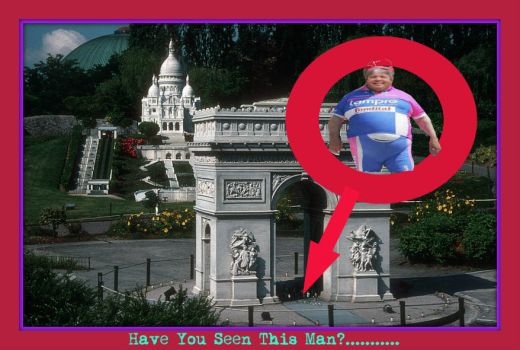 Members of the Bugosi Secret Service Topographical Operative Paratroopers Surveillance
(B.U.S.S.T.O.P.S.) have decided to release this photograph of the principal suspect in the "Big Ben" mystery.....
The photo was taken over a garden in Rebmuda, a garden which is FULL OF STOLEN MONUMENTS!.....
It confirms my deepest suspicions......that WE DO NOT KNOW THIS MAN!!......
The investigation continues.......and goes on........
Created by lelabugosi Published 12 March 2014

Well said Jig! (That was so funny!)

Will someone PUH-LEEEZE tell SLOG to put some clothes on!
http://www.jigidi.com/created.php?id=ALYGZTMX

I should think so, many wise talks....

Oldfart and my mate Fred in the bowl should get on well together!!

not really, but I hope she doesn't lend it to to him

wonder if he has a licence

Mr. Squirty,do you think she might let me borrow it for the week end? One of the gals here at the old folk's home has been giving me the eye. Uh... it is a sports car.....right?

Well Churchy, it was a WIN-WIN situation.........you got your libido back and I got the reward!

Should be just right June!

I got elastic, been a bit stretched but it should be alright

Such a fascinating idea Varda - where is that volcano???? You really need no elastic I should think....

Master Henry, how would you like to have your mouth washed out with soap? And then do a bungee jump into the nearest active volcano. . . ?

I would have thought that CL would have a much happier life without her lost libido. she could then concentrate on her god, and not care when the gentlemen stopped calling, as they do when faster sportier models come along

I drove one of those once....many years ago.

I think it's an Italian Sports Car, you will often hear one say, "That man has a fast Libido".

MH only Brits will understand this, everyone else will say you have a foul mouth.......just sayin' mate!

Oh Church Lady - do you really want it back without questioning patsquire as to whether he "used" it or not......Ooooh Yukkky!!!

Oh thank goodness you found it it! I was just about to put up posters around the neighborhood offering a reward!

Plummy, perhaps I should have said "relative reason and amity" since I was speaking in BUGOSILAND TERMS!

Churchy, no worries, I found it. You can have it back this afternoon, if you can wait that long! You know the phone number.

I lost my libido.

you missed out temper, i lost mine yesterday

Plummy and gemmy, two pleasant voices of reason and amity amid all the confusion.

Just making a little joke about cheese, plummy, although most of it I don't like, some of it absolutely disgusts me, but I love it on Italian food. I gave up trying to figure out why long ago.

So, there IS NO MYSTERY, lelabug simply noticed the disappearances, rushed to his computer, and jumped out ahead of the crowd with a NEW TOPIC for Bugosiland. Hummphh!!! Phoooey!!! Raspberries!!!

Precious-pebble.........that may well be an alien spaceship, carrying off the monuments - the FACT remains, that famous monuments are disappearing all over the world, and they are reappearing here, IN REBMUDA!........
Hanne-with-pipe.......your eyes are deceiving you.....THE EVIDENCE IS PLAIN TO SEE!.......

BTW, I have been receiving numerous calls from people who have lost things - please, if you have lost your watch, mind, marbles, way, cat, purse, interest, virginity (see Mr.Squirt about that one), memory, keys, or husband/wife, DO NOT PANIC!........Some of these things happen all the time.......

Imagine those people climbing up those stairs in the background, each step is taller than they are!!....There's something fishy here.....

I KNEW it wasn't the right dome, it's FAR too small! And L'arc de Triumphe is much bigger!! Just look at the roses and the fence, it's a toy arch. The people there are photoshopped very small they might be able to seek shelter under the roses if it should start raining.....

Are you sure that's a dome of a building in the upper left, Robbie? I thought it might be an alien spaceship (wink wink) with an atomic transporter on board relocating all the monuments along with knock-offs in a replicated Rebmuda.

P-Skewed, am I to understand that you abstain from all comestibles whose production involves the use of microscopic organisms? If so, you must get pretty hungry. And thirsty.

Mmmm-mmm! I bow to you, Robster! Once my eggs are scrambled I put them on regular soft white bread with mayo for a sandwich. But the eggs go right on the plate if I'm also having corned beef hash and baked beans or home fried potatoes.

Now WHAT'S ALL THIS about this gentle soul being a SUSPECT IN THESE **ALLEGED** DISAPPEARANCES??? Lela, you've got the ENTIRE WORLD in an UPROAR with these plots within plots, these fantastic schemes, all this intrigue and, dare I say it, CONSPIRACY?

You are the master Squire, that sounds delicious and I will try it on a sandwich, I usually fry my omelet just like that and add some grated gruyere or parmesan cheese. I will try it as a sandwich next time, thanks mate!
For our egg sandwiches we hard boil the eggs, Jenny mashes hers plain with pepper and Hellman's mayo. I add a touch of powdered Colman's hot mustard, chopped parsley and salt and spread between soft whole wheat buttered bread! Makes a nice sandwich!

Yes indeed ladies, let us abandon these confusing musings and escape to the subject of culinary delights. Bacon sandwiches are proof that God loves us. Cheese, on the other hand, goes in the opposite direction. They take ordinary, wholesome milk and stir in a bunch of bacteria. The bacteria, also known as germs, eat up the good milk, digest it and poop it out, and some people eat it and call it cheese. YUK. Germ poop! So Plummy, please forgive me if I don't add shredded cheese to my delicious egg sandwich.

That number, for bacon sandwiches and other services, is 1-800-555-getlucky! We give discounts for frequent flyers.

P-Skewed, you need to add some shredded cheese to that sandwich.

Yes. Yes. Indeed, where were we? The B.U.S.S.T.O.P.S., that's where we were. Any group that includes paratroopers is bound to be superior, above par and generally on top of things in every way. So GOOD WORK lela, getting them on the case. The trouble is, they work for you. Which means, I think, maybe not but maybe so, that if you're really behind this nefarious scheme, the mastermind as it were, B.U.S.S.T.O.P.S. is just more smoke screen which, how are we to know?

Er, but I'm still stumped. Does this evidentiary photosurveillance photo prove that certain monuments (not previously known to be missing) are actually somewhere in, on or around Rebmuda? If so, why these and not Big Ben, the Eiffel Tower, etc. COULD I, ME, MYSELF, MOI have been wrong in my earlier theories? How shocking that would be! Less than Sherlockian, me? Does it mean something, anything or nothing, that the inset arrow is pointing to the WRONG MAN?

We shall, or shall not, see.

All I know is that, IF I'd seen him, I'd have remembered. I swear he's not anyone I know!

You're so right, Hanne. The Robster's not fat, it’s just his overwhelming awesomeness swelling up inside of him.

And by the way, I'm talking about a real master, not MasterHenry!

Ohh Lela, how COULD you?? - an EGG sandwich - and - Jenny?? - and the screen? - and poor Robster who has done nothing but feeding his father's goldfish with good stew??? He's got such a BIG heart, Robster, it is what fills so much inside him....really....

Have you no decency, man? There are ways to present certain information, AND OTHER WAYS NOT TO! I'd say you hit "NOT TO" pretty dead center on this one! Poor Jenny. Poor Jenny's egg sandwich!

(By the way, Robster, how do you make your egg sandwiches? I sauté some chopped onions in bacon grease and real butter, and then scramble one jumbo or two smaller eggs with them, adding a little salt and a generous dash of black pepper. But I'm always open to suggestions from a master!)

This is preposterous, horrendous, supersilleous and any other "ous" which I don't understand!!........Furthermore, Jenny just guffawed her egg sandwich all over the screen!!! YUKKY!! I cannot go on until I wipe the screen and feed my parents...........there will be a reply in defence of this "suspicious suspect" who is NOT the perpetrator!!!