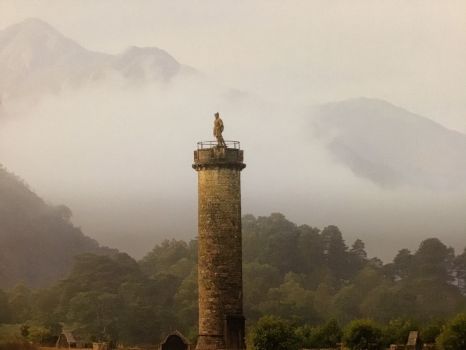 The Glenfinnan Monument at the head of Loch Shiel marks the arrival of Prince Charles Edward Stewart (Bonnie Prince Charlie) from Rome, coming to claim the thrones of Scotland, England and Ireland. He raised an army of supporters but was defeated in 1745 at the Battle of Culloden in Inverness-shire.
Created by Andrew2 Published 1 August 2020

Image copyright: I took the photo

@Andrew2 A remarkable history. Thanks for sharing your story.

@jerrys PART 2. The final stage of my working life happened because the Training Centre was taken over by a management buyout who immediately set about firing everyone and reducing the salary of everyone else. Fortunately some of us (the “blue eyed boys!) were transferred and I found myself being an auditor all over central Scotland and really enjoyed those final few years before retiring at 63, but since we still had to pay a mortgage on our home, I was invited to work for a College. After that I worked for a Christian homeless charity which was great fun. Finally I was free to enjoy a quieter more leisurely pace of life. So now you know why I have time to sit comfortably at home and take plenty of time to work on jigsaws from friends like you!
My apologies that I’ve taken sooo long and in the end told you more than you needed, or wanted to know. So I’ve told you about my working life without telling you about my life and loves but that will have to wait. Stay safe my friend and hope the pain eases a bit. Andy

@Andrew2 Thanks for the background. Seems your last position had its rewards in serving the less abled who are among us worldwide. Congratulations!

Thanks for the comment. I r retired on my 65th Birthday in 2003 when I so I am now 82. I’ve had three jobs. When I left school in 1953 I worked for a firm of bespoke gents tailors, selling suits, jackets and coats. I didn’t like the selling part but I did enjoy measuring and fitting. When my first daughter was born I started working in the offices of a firm of Shipbuilers and Engineers, as an Costing and Wages Clerk. Monday to Thursday four of us priced every article bought for each ship we built while the rest of the office staff calculated the amount of time taken and the amount of wages payable to each man and woman involved in the build. On Fridays all forty office staff were involved in preparations needed to Pat about one thousand men and women in cash.
When the future of shipbuilding on the Clyde looked uncertain I got another office job in the accounts office of a training establishment. Some of the trainees were retraining for totally different professions like hairdressing, watch & clock repairing, electronics, motor vehicle repair, light engineering etc.we also had about 100 men and women who couldn’t survive in a normal job perhaps because of brain injury or epilepsy or some other debilitating illness through which they just could not hold down paid employment.

@Andrew2 Terrific shot! From what profession did you retire (assuming that you have retired, of course, being the presumptuous person that I can be!)?

The Glenfinnan Monument was erected in 1815 in memory of the volunteer army of Scottish men rom different Clans who supported Bonnie Prince Charlie and the Jacobite cause. Recently the Monument and the Viaduct were seen as the area of the Triwiard challenge in the Harry Potter film.