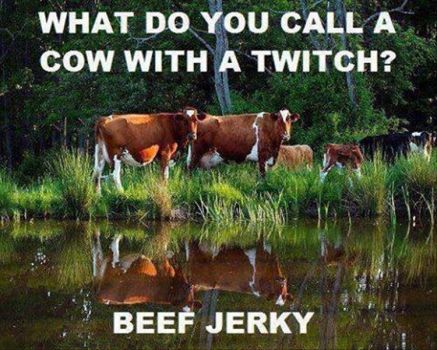 The type of meat most consumed worldwide is what?
Created by Stillmanic Published 22 August 2019

no matter how vegetarian a vegan is, bacon always smells good!

LOL Max, that makes me sound a little weird.

Yet another rave review for Kevin!

Yes! I love BACON, rarely eat it, but when I do I overdo.

I'm not surprised it's pork. There is currently a reincarnation (literally) of The Boar War going on in America.

I am sure more rats and mice are eaten than pigs.

Well, unless you are limiting the consumers to human beings... but you didn't type that!!

Smarty-pants and clever-clogs points are expected once again... (I may have to construct a small silo for them...)

I was sure it was Spam. Well, off to work on the libretto to my next musical: porkalot...

Pork is the culinary name for the flesh of a domestic pig (Sus scrofa domesticus). It is the most commonly consumed meat worldwide, with evidence of pig husbandry dating back to 5000 BC.
Pork is eaten both freshly cooked and preserved. Curing extends the shelf life of the pork products. Ham, smoked pork, gammon, bacon and sausage are examples of preserved pork. Charcuterie is the branch of cooking devoted to prepared meat products, many from pork.
Pig is the most popular meat in the Eastern and non-Muslim parts of South-eastern Asia (Indochina, Philippines, Singapore, East Timor), and is also very common in the Western world, especially in Central Europe. It is highly prized in Asian cuisines for its fat content and pleasant texture. Consumption of pork is forbidden by Jewish, Muslim, and Rastafarian dietary law, for religious reasons, with several suggested possible causes.
Charcuterie is the branch of cooking devoted to prepared meat products such as bacon, ham, sausage, terrines, galantines, pâtés, and confit, primarily from pig. Originally intended as a way to preserve meats before the advent of refrigeration, these preparations are prepared today for the flavours that are derived from the preservation processes. In 15th-century France, local guilds regulated tradesmen in the food production industry in each city. The guilds that produced charcuterie were those of the charcutiers. The members of this guild produced a traditional range of cooked or salted and dried meats, which varied, sometimes distinctively, from region to region. The only "raw" meat the charcutiers were allowed to sell was unrendered lard. The charcutier prepared numerous items, including pâtés, rillettes, sausages, bacon, trotters, and head cheese.
Before the mass production and re-engineering of pigs in the 20th century, pork in Europe and North America was traditionally an autumn dish—pigs and other livestock coming to the slaughter in the autumn after growing in the spring and fattening during the summer. Due to the seasonal nature of the meat in Western culinary history, apples (harvested in late summer and autumn) have been a staple pairing to fresh pork. The year-round availability of meat and fruits has not diminished the popularity of this combination on Western plates.
Pigs are the most widely eaten animal in the world, accounting for about 38% of meat production worldwide. Consumption varies widely from place to place. The meat is taboo to eat in the Middle East and most of the Muslim world because of Jewish kosher and Islamic Halal dietary restrictions. But, pork is widely consumed in East and non-Muslim Southeast Asia, Europe, Sub-Saharan Africa, the Americas and Oceania. As the result, large numbers of pork recipes are developed throughout the world. Jamón is the most famous Spanish inlay, which is made with the front legs of a pig. Feijoada, the national dish of Brazil (also served in Portugal), is traditionally prepared with pork trimmings: ears, tail and feet.
According to the USDA's Foreign Agricultural Service, nearly 100 million metric tons of pork were consumed worldwide in 2006 (preliminary data). Increasing urbanisation and disposable income has led to a rapid rise in pork consumption in China, where 2006 consumption was 20% higher than in 2002, and a further 5% increase projected in 2007. In 2015 recorded total 109.905 million metric tons of pork were consumed worldwide. By 2017, half the world's pork was consumed in China.

Is that true...or is it Pulp Fiction?

another excellent answer. Vegetable meat is definitely not so much consumed...

It didn't surprise me Ardy :))

I doubt it's beef jerky. LOL I don't eat any of it but I do have a guess. I'll find out tomorrow. Thanks, Bonnie.

I think I know this one.

The answer to the question is so obvious that everyone should get it. It is DEAD meat.

I am pretty sure I know the answer here. It will be mice. Or possibly rats.

Another Darwin award….
A 36-year-old biochemist that was dying to see the legendary rock band KISS on their farewell tour got his wish. Shawn travelled from Calistoga to the Oakland Coliseum, and was enjoying the show, except for one little problem. He was dissatisfied with his seat in the top row of the stadium. He climbed a 7-foot wall to gain a better view of the stage - only to inadvertently discover a new seat three stories below.
The group he had travelled to the concert with had no idea he was missing, until the show ended and the police began asking questions. That's when they learned that Shawn had mistaken a curtain for a solid wall, leaned back, and fallen to his death on an escalator 100 feet below.
A police spokesman said the site of the accident was "a good place to obtain a better view."