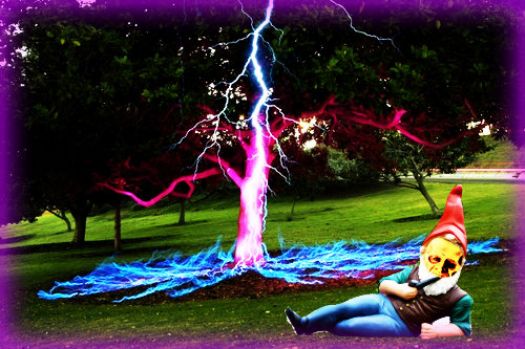 Today found me enjoying a peaceful afternoon in the garden.......when, all of a suddenly, unbeknownst to me, a bolt of lightning scored a direct hit on the tree below whose branches I was reclining.......
Of course, I wondered what Mrs.Bugosi was screaming about, though I did think that the temperature had suddenly risen........
This long-exposure photo captures the exciting moment of my near-death experience........
Created by lelabugosi Published 12 May 2013
Why this advertisement?

Did you ever see this:

Meeting between Einstein and Chaplin

- What I admire most about your art is that's
universal. You don't say any word and the
whole world understands you!

-True. But your glory is greater! The world
admires you while no one understands you!

Hanne, I once held a two-hour telephone conversation with Einbert Alstein - by the end of it, neither one of us had any idea what the other was going on about.........we arranged to keep in contact......
Juneee........Yes, I also prefer to keep things simple, and to the point as well........

or you get out of a thermos more or less what you put into a thermos, we Reporters are taught to keep things simple, Goodness knows why in this neck of the woods

Mr Einstein would feel perfectly at home I think ..... nobody ever understood what he said either....

How DOES a thermos know whether to keep something cold, or keep it hot?

Well, your honorable "thermos" is left intact and unspilt....

It is possible to be struck by a
meteor or a single-engine plane while
reading in a chair at home. Pedestrians
are flattened by safes falling from
rooftops mostly within the panels of
the comics, but still, we know it is
possible, as well as the flash of
summer lightning, the thermos toppling
over, spilling out on the grass.
And we know the message can be
delivered from within. The heart, no
valentine, decides to quit after
lunch, the power shut off like a
switch, or a tiny dark ship is
unmoored into the flow of the body's
rivers, the brain a monastery,
defenseless on the shore. This is
what I think about when I shovel
compost into a wheelbarrow, and when
I fill the long flower boxes, then
press into rows the limp roots of red
impatiens -- the instant hand of Death
always ready to burst forth from the
sleeve of his voluminous cloak. Then
the soil is full of marvels, bits of
leaf like flakes off a fresco,
red-brown pine needles, a beetle quick
to burrow back under the loam. Then
the wheelbarrow is a wilder blue, the
clouds a brighter white, and all I
hear is the rasp of the steel edge
against a round stone, the small
plants singing with lifted faces, and
the click of the sundial as one hour
sweeps into the next.

Well, who gnomes what minor matter may seem important to gods and devils? I gnome what I said, and I stand by what I gnome.

God and the Devil collaborating about a gnome lying on a lawn?????? Don't you think they've got other more serious things to do, ps??? If it wasn't the Lord of the Gnomes I would say as teamac that it was that Angus having "fun"!!

I think we should get our gnomenclature straight here. I gnome the blue-white bolt at the top is lightning, but I don't gnome if the blue stuff sizzling out from the tree along the ground is lightning or Devil's Fire! If it is Devil's Fire, then lelabug, I gnome you're in a lot more trouble than you gnome you are.

Because as everyone gnomes, lightning comes from the gods above and Devil's Fire comes from below. And if the gods and Satan are working together against you, lelabug, baby I gnome you're in a world (a corporeal world, this world, this earth in which we live in) of hurt. 'N you better gnome it, too! Not even gnomes are safe, that I gnome fer shur!

I find this event very odd being as it followed so closely on the heels of your summoning the mighty Angus McBugosi.
I am glad that you were not harmed LelaB

It must have been providence that you were in your Gnome persona......had you been wearing your big ears that so effectively cover your big ears....you may have gotten an ear full.....

WOW!!! That must have been some MAGICAL MOMENT!!

Drat. It missed. You could have had a nice, electrifying experience. You know, shock therapy could be a major help to you.

In that case, Hanne-with-pipe-somewhere, it was a very nice thought........

The Lord of the Gnomes might have wanted to honour you in this way for your initiative with garden gnomes, if it was so, it was totally harmless and a show........really!!

Tom-minus........Sweat no more!.........I, of course, was the model for the garden gnome sent to Mr.Christmas-Carroll - therefore, there are countless gnomes around the world who look just like me!.....

This looks like the same garden gnome that was sent to the aging ChristmasCarol. Are there really identical twins? Are there two LelaBugs? Thinking about this possible possibility I am breaking into a sweat...or is there just a heavy dew today.

Why were you taking a long exposure shot in the first place?

Have you any conflicts with Zeus? He is said to do so when he wants to underline his power...!!

Phew! That was close.