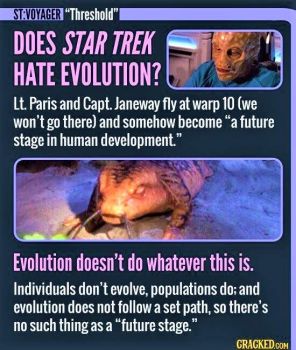 From the comedy and science-fiction-nerds website Cracked.com.
Created by Mischka Published 1 June 2021

As I grow older my evolution is to be able to ignore stupid, even my own :-))

I'm with you, Mischka. Evolution does not work this way. Whoever wrote this episode needs to study basic science a wee bit more.

So few Bipeds on this planet, but Bazillions in outer space. Go figure.

Who knows what will happen in a million years.

Improvements and adaptations are two different things I guess... perhaps it was just an adaptation to asteroid strikes, global flooding and a dearth of cows...

Ants have not evolved over time and they are smarter than humans. Just saying.

Geez, I sounded almost angry there. I'm not. I'm laughing, just as they do at Cracked.

It is not an improvement, unless humans (millions of years in the future) evolved to live in a different environment. But I do know that the author of the article is right - evolution doesn't work that way.

A mere tittle of complaint from me would be that evolving away from a voice-box and manipulative fingers would not be at all likely for success of offspring.

Presumably it is an improvement... but who knows?

I see the resemblance. LOL, Fiona.