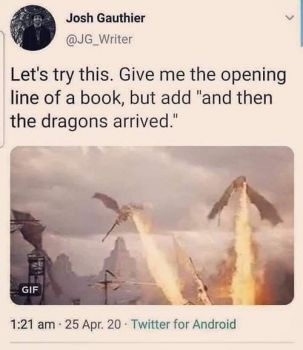 Nice to 'resurrect' this thread. Here's a few more from me:

Once there was a gentleman who married, for his second wife, the proudest and most haughty woman that was ever seen. And then the dragons arrived. (Cinderella by Charles Perault in 1697. Considered the father of the fairy tale.)

It was a dark and soundless day near the end of the year, and clouds were hanging low in the heavens. And then the dragons arrived. (Fall of the House of Usher - Edgar Allan Poe.)

You will rejoice to hear that no disaster has accompanied the commencement of an enterprise which you have regarded with such evil forebodings. And then the dragons arrived. (Frankenstein or the Modern Prometheus - Mary Shelley)

On the first Monday of the month of April, 1625, the market town of Meung, in which the author of Romance of the Rose was born, appeared to be in as perfect a state of revolution as if the Huguenots had just made a second La Rochelle of it. And then the dragons arrived. (Three Musketeers - Alexander Dumas)

The sun shone, having no alternative, on the nothing new. And then the dragons arrived. (Samuel Beckett - Murphy)

"One thing was certain, that the white kitten had had nothing to do with it:—it was the black kitten’s fault entirely. For the white kitten had been having its face washed by the old cat for the last quarter of an hour (and bearing it pretty well, considering); so you see that it couldn’t have had any hand in the mischief. "
And then the dragons arrived.

@dhi... ha, ha, ha! See my opening comment at the beginning of the comments. I guess I know what book you were reading. ;-)

Well... I was trying to think about something monumental...

In the beginning, God created heaven and earth...and then the dragons arrived.

Nope, can't do it with the book at hand.

Howard Roark laughed. And then the dragons arrived. (Ayn Rand - The Fountainhead)

Wow -- everyone has come up with some *great* "new" first lines here. 😁 robert952, I think you get the award for the most research behind your contributions. 😉

Thanks to each & every one of you for taking the time to join in the fun.

Alice was beginning to get very tired of sitting by her sister on the bank, and of having nothing to do" and then the dragons arrived.

Mr. and Mrs. Dursley, of number four, Privet Drive, were proud to say that they were very normal, thank you very much, and then the dragons arrived ( in disguise as owls)! Harry Potter and the Sorcerers or Philosophers Stone! ☺

Hmm, Just finished a 3-hour drive by car. A good way to rest after that.

Looking over books at www.gutenberg.org made the task a bit easier and fun as I came across old friends from the past (books and stories). Once I found a few, I ended up checking out a lot. These are all from books I have read, though some many, many, years ago.

(BTW, you might want to check out guttenberg.org. All works there are in the public domain. As point of fact, anything published in the United States before 1925 - books, movies, music, or art - is now in the public domain and can be freely used for what ever purpose.)

This 'challenge' won't work with a lot of books. Just like adding 'in bed' or 'under the covers' to the end of your fortune that comes out of the cookie doesn't always sound humorous.

I think these work. Sometimes the results come out humorously. Others could be the start of a totally different story.

Thanks for the idea, @okieclem (and Josh Gauthier)

***
Marley was dead to begin with. And then the dragons arrived. (A Christmas Carol - Charles Dickens)

***
The year 1866 was signalized by a remarkable incident, a mysterious and puzzling phenomenon, which doubtless no one has yet forgotten. And then the dragons arrived. (20000 Leagues Under the Sea - Jules Verne.)

***
It is a truth universally acknowledged, that a single man in possession of a good fortune, must be in want of a wife. And then the dragons arrived. (Pride and Prejudice - Jane Austin) {I particularly like this result.}

***
On February the First 1887, the Lady Vain was lost by collision with a derelict when about the latitude 1° S. and longitude 107° W. And then the dragons arrived. (The Island of Doctor Moreau - H.G. Wells)

***
Tara of Helium rose from the pile of silks and soft furs upon which she had been reclining, stretched her lithe body languidly, and crossed toward the center of the room, where, above a large table, a bronze disc depended from the low ceiling. And then the dragons arrived. (The Chessmen of Mars - Edgar Rice Burroughs) {Talk about a run-on sentence! However, this sounds like it could get a bit kinky.}

***
The Trojans, after a seven years’ voyage, set sail for Italy, but are overtaken by a dreadful storm, which Aeolus raises at the request of Juno. And then the dragons arrived. (The Odyssey - Virgil ) {What else could go wrong? Oh, wait, a whole bunch of stuff.}

Stately, plump Buck Mulligan came from the stairhead, bearing a bowl of lather on which a mirror and a razor lay crossed. A yellow dressing gown, ungirdled, was sustained gently behind him on the mild morning air. He held the bowl aloft and intoned:

And then the dragons arrived. (Ulysses - James Joyce)

***
Mr. Sherlock Holmes, who was usually very late in the mornings, save upon those not infrequent occasions when he was up all night, was seated at the breakfast table. And then the dragons arrived. (The Hound of the Baskervilles - Arthur Conan Doyle.) {A not too unusual occurrence at 221B Baker Street?)

***
In the ancient city of London, on a certain autumn day in the second quarter of the sixteenth century, a boy was born to a poor family of the name Canty, who did not want him. And then the dragons arrived. (The Prince and the Pauper - Mark Twain) {This could have led to a totally different tale.}

***
On an exceptionally hot evening early in July a young man came out of the garret in which he lodged in S. Place and walked slowly, as though in hesitation, towards K. bridge. And then the dragons arrived. (Pride and Prejudice - Fyodor Dostoevsky)

***
In what we may term "prescientific days" people were in no uncertainty about the interpretation of dreams. And then the dragons came. (Dream Psychology - Sigmund Freud.) {Yes, I have read Freud and Jung, Adler, et al.}

OK, NOW I have gotten carried away. However, I found it entertaining. Hope you did, too.

It is a truth universally acknowledged, that a single man in possession of a good fortune, must be in want of a wife; and then the dragons arrived.
("Pride and Prejudice", 1813)

Emma Woodhouse, handsome, clever and rich, with a comfortable home and happy disposition seemed to unite some of the best blessings of existence and had lived nearly twenty-one years in the world with very little to distress or vex her; and then the dragons arrived."
("Emma", 1815)

In a hole in the ground there lived a hobbit. And then the dragons arrived.

@okieclem It was hard to stay awake all night, Edgar found, even on the most important night of your life, and then the dragons arrived. "The Evening and The Morning" by Ken Follett (the prequel to The Pillars of the Earth), 2020

This should result in some very good reading. Any of the Once Upon a time books will work well here.

"Call me Ishmael, and then the Dragons arrived"

Since it's Sunday: "In the beginning, God created the heavens and the earth -- and then the dragons arrived." 😎